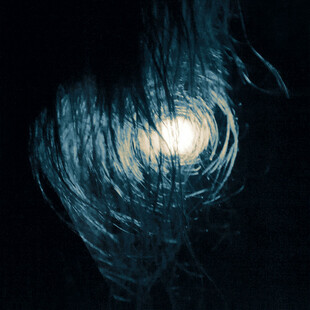 Finnish nuts Oranssi Pazuzu are one of those oddities you secretly hope for every time something slightly off-kilter looking arrives in the post.

From the moment this album starts you know you are in for a chaotic, mangled treat.

Taking in an influence as wide ranging as post metal, black metal and even the sloppiness of early Death albums, the painter's palette here is smudged and daubed turd-like across the canvas. However what this amalgamation creates is perhaps one of the best albums we've heard in a while. There's a crass black metal tinge to proceedings of course, but this isn't your garden variety corpse paint and leather fayre. No, it's more ritualistic than that, giant waves off this could be Sunn0))) on a particularly heated day, all drones and howling, lycanthropic screams, but then at others it resorts to atmospheric sections of plodding drums and gurgling bass.

What never slows is the pulse and overwhelming darkness. Deeply unreal and vortex-like, it invites you to peer into its depths, confounding you with rank hallucinations and visions of a sick, magick world.

Tracks here are vast and seemingly endless, starting from unassuming tattoos like second track Lahja before turning expectations skewed. This particular exorcism piles on the delayed vocals and uncanny keys to whip up a foul, stinking brew that sounds equal parts desolate snowscape and ancient heat-baked burial mound in scope. It really is that mad. That isn't to say it's impenetrable, rather just mysteriously captivating.

Some of Värähtelijä legitimately sounds like a portal to hell is opening. The rush of hot air is palpable at the close of the hyper-speed and dizzying Hypnotisoitu Viharukous, just try and stay focused on anything else, it's nigh-on impossible.

Similarly, the unbalanced genius that makes up the 17-miute album centre point Vasemman Käden Hierarkia will make jaws drop, not only with the stomach-churning overload of wonky basslines, tremelo abuse and Immortal-esque croaked vocals, but the sheer totemic, multi-faceted twists and turns it drags you through relentlessly.

Said track descends into blind fuzz and ephemera for sections, before returning like a cat with claws and scratching your face to ribbons.

If it sounds hard to keep track of, that's because it is. Dive in, this is an album that demands your total attention and won't let go.