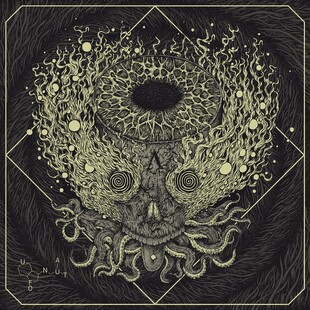 Unlike most, I'm all for people making up new sub-sub-genres within metal, but even I understand how the phrase 'blackgaze' could send an unwelcome coldness down the spine. And while Entropia, from Poland, are seemingly self-labelled as a mixture of black metal, post rock and shoegaze, this is so much more.

Immediately leftfield, with odd signatures, Fractal is all over the shop yet inconceivably coherent, a centrality maintained powering it's core. Across the album, even at its most esoteric stretches, there exists a powerful involvement with the listening experience, never swallowing itself in self absorbing crypticism. Grounding themselves to Earth, as their imaginations float into the stratosphere, gives Ufonaut an immediacy you wouldn't expect with such experimentation.

Samsara's purity of black metal opening is sustained, but a post-metal aura evolves within, glorious riff inflorescent toward it's end, as pure an amalgamation as you could wish. The shrieks of startling noise laid upon the title track fight against relentless blackened drum beat. Entropia succeed album-wide in not just moving from one style to another when the time befits, but pulling all strains together seamlessly. Only the closing Veritas separates the varying thematic inputs.

They're not as mystically unhinged as Oranssi Pazuzu, but share many an attribute, the psychedelic, the twisted take on the mother genre. The Finns release their latest album soon; previously operating in a field of their own - fuck it, a pastoral county of one - they now have a high bar set if in comparison. Whatever happens, these are exciting times to live in, experimentalism not confined to the boring frays of the overstudious, but in the hands of the vital, the true vanguard. Whether it's Oranssi, or Bosse-de-Nage, or Krallice, or now, brilliantly, defiantly, uproarously, Entropia, hats off to you.

And as for Ufonaut itself... truly magical. All of it.