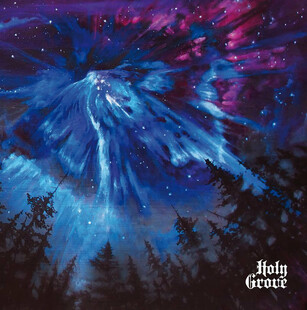 Portland's Holy Grove straddle between classic rock stubborness and the more modern doom rock interpretation of those bygone eras, nicely balancing the reverence. Naturally it feels like you've heard this before, but there's something that keeps you listening, and the more you delve the more entangled in its web you find yourself.

On more than one occasion my mind is drawn to Spirit Caravan or even more so The Hidden Hand as pointers of influence. And while Wino's rasp is quintessential to that formula, the vocals provided by Andrea Vidal are as central to the picture for Holy Grove. She provides a strong forefront, more the boldness of Witch Mountain's Uta Plotkin than, as one example, Blood Ceremony's Alia O'Brien. On that train of thought, this would appeal to fans of the Lucifer album of last year as well, albeit exchanging the European gothic charm for a more unswerving prototypal seventies rock homage.

They live dangerously close to the incriminating tag of "boogie rock" here and there, such as on Caravan, but the production and riffs hold a heft that satisfyingly edge them towards safety at such times. The album is solid throughout, and while there's a slight sense of damning with faint praise in that statement - there are moments that pass you by a touch, whilst never off-putting (the self titled track, from this self titled album (hey, it never hurt Maiden, Sabbath or Motorhead) being an example) - it is more in testament to a well rounded album.

And there are highlights aplenty. Huntress' weight may appeal more directly to my recent tastes, yet even taking that into account it still rises above, a propolsive doom riff, Sabbathian in ethos, heavier than elsewhere and warming as a result. The scalding soloing that closes Death of Magic is of a guitar unleashed to bask in glory, while there's similar joy in the stonerish end to the album's closer Safe Return. And it feels a more appropriate end to this review too, underscoring the positives on what is a commendable doom rock release.