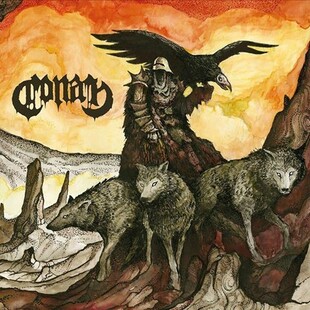 I vowed to myself to not drag this review into an over-synonymised continuous stream of historic or mythical allegory in honour of Conan's name and inspirations, as many have done before and indeed for this album already, no doubt extolling Revengeance as "the thunderous parp eminating from a half-minotaur half-centaur's wooly buttocks post- mead and Mongol-manflesh feast" or some such. Not that I'm claiming reviewer superiority, just I'd be crap at it. As I've just shown. Yet the experience of listening to Wrath Gauntlet at high volume through headphones, as it punches you square in the chest, creates involuntary imaginations of a Viking war march tattoo - glory or death, glory to our lord Conan (etc).

Yes, Conan are back. Yes! indeed. The most important and totemic doom band of our isle since Electric Wizard, and even then more grounded, more relatable (although perhaps that's a northern thing), return. For a band who plough a consistent groove, you think you'd have fears a new release will be the tipping point towards staid staleness, yet with Conan that anxiety doesn't arise, a blind faith earned. It's an allegiance renumerated with Revengeance on two major counts.

First is evident forthwith, as Throne of Fire launches outwards, at a velocity exotic to anyone with even a passing awareness of their former work. There's ostensibly more agitated movement in the first few seconds than across Blood Eagle. It does return to the eardrum-splitting Conan standard-slow, but flits felicitously between the two, energising an electric atmosphere. Then thiry seconds from the close, woargh... pounding riff epic closure. The title track is similarly uptempo, for the majority an uncommon pulsating pace applied. They've never lacked conviction, but here sound somehow energised, so vital.

Second, even when they hit the Conan groove, it's arguably done as well as ever. As well as Wrath Gauntlet's incursion, Every Man is an Enemy applies that repetitive relentlessness that they have no doubt patented, the track irresistable, your body moving uncontrollably, subconsciouslly subservient to the battery. By this point you're beginning to comprehend and acknowledge their best work to date.

Conan have the amazing ability to not push boundaries through experimentation or cross-genre-pollination, but yet still expand doom environs through focussed strategies of honing the doom staples of riff and tone. With Revengeance they're definitively further along that journey, yet also grandly exploring and expanding their own framework to give a change of pace here and there, a fresh stance on their definition, all the while still gaining ground on that doom perfection target. And the best thing about it all, as clearly found in the gigs they play, to interviews given that you read, and most of all to the music they continue to give us, is that they're ultimately just three dudes intent on having a good time. Praise Odin, and until they're welcomed at the gates of Valhalla, long may they continue.