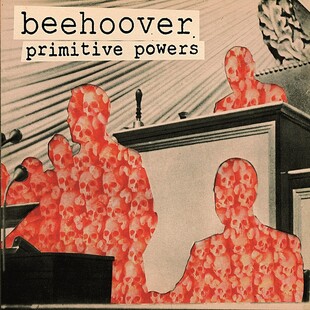 There are albums that define memories of periods of your life, soundtracking revelry into times gone, adventures past and absorbed. Beehoover's The Sun Behind the Dustbin is certainly one of those, and their follow up Heavy Zooo is synonymous, along with Black Cobra and Witchcraft, of parties and grand times in the flat I had around 2008. For a band to occur twice in this exclusive nostalgic club of recollection shows the quality offered and regard I hold them in.

This is the third album since those heady days, and while understandably missing that moment-of-awe awakening when the weirdness suddenly clicks that came with The Sun... or the bombastic majesty of ...Zooo, there has been plenty to delve into and enjoy. Happily, Primitive Powers is probably the best of their last trio, providing tracks to investigate, sit with and allow to nussle into your heart.

First time apostles to the church of the 'Hoover will, almost as a guarantee, not get this, like I didn't many years ago, wondering on first listen (and several after) why they gain such adoration. But, as ever, it is with repeated exposure that reaps the true benefits. Established advocates will find warming familiarity in tracks such as the standout Millwheels of Being, that utterly distinctive sound, Claus and Ingmar's symbiotic, intuitive movements through the angular and awkward toward a destination that sounds abnormally beautiful.

As ever, Ingmar's lyrics are worthy of indepth exploration alone, his ability to spin a tale so flowing yet bizarre, to run sentences across line ends unnaturally, Neil Fallon his only true peer in this regard to my mind. The strangeness inherent through Anti Zooo (eg "the ear of a fennec too cute to withstand with the paw of a grizzly instead of my hand") harks back, as the title suggests, to the oddball animal amalgamations imagined on Heavy Zooo and its fantastical artwork.

Admittedly, even for a fan such as myself, this album's quality does take time to filter through, but then they've earnt that and you know its time worth investing. Each listen reveals more, different tracks crack open one by one, flowering unexpectedly on each run through. There is still no-one who sounds like the German bass and drum duo, and I'm ever thankful for the ongoing existence of Beehoover.