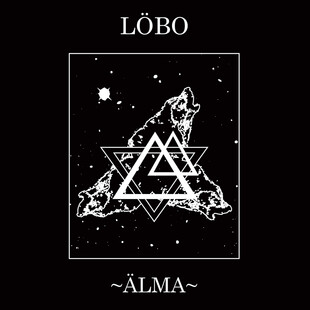 A creature rises from black primordial ooze, its mass harboured in thick, treacly gloop. It takes its first steps on dry land and moves so slow as to lose its centre of gravity, the legs shake unsteadily, wobbling as if calculating the sheer weight. It crashes to the floor.

The first few moments of Almaby Lisbon's Löbo come to fruition in this way. This is deadly, blackened doom in the most arching, dark manner. The spaces between downtrodden chords hang as heavy as the notes when they arrive. But don't think its simply a product of stoned minds jamming as fast as their minds will allow, nah. This has some serious heft ingrained within, there's a cool synching of electronic notes underneath that shift like those cliched tectonic plates we always write about as reviewers, except this time the plates seem to be there.

Valley-carving glaciers sometimes move faster than this, oak trees grow with more haste, the tortoise has already lapped you before the first track is over, yet these silly metaphors also serve to emphasise Löbo's faithfulness to the charming, yet dangerous-sounding path they choose to plod. Alma is coming out on tape and 12" this year and should suit the medium well, the hiss of tape and the crackle of vinyl will serve their myopic lamentations well.

Löbo work on almost infuriatingly unambitious level, but there is where they shine. The haunting Carne e sombre barely builds above a crawl, but is the doom equivalent of electronica artists Demdike Stare or Blanck Mass, working on one central, unshifting certainty while exploring tones and chirruping and extraneous parts around it. The overall sense of sadness that pervades much of Alma is almost too much to bare. On first approaching this music, you can pre-judge, dig further down and there's true beauty underneath.