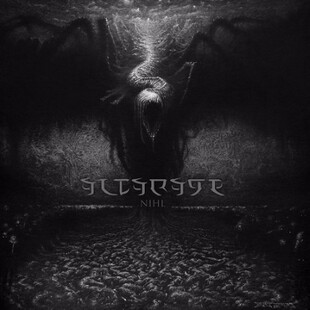 Spain's Altarage make a quick return to my reviewing inbox, and I feel more prepared this time around. Then, with last year's two track demo, I was tentatively feeling my way into the truly nihilistic extremeties of death metal that they approached - now, several months on, I'm here unaccountably addicted to the fierce wall of sound strategies that their peers and demo employ.

You're immediately hauled into the battery of guitar and drum assault, tides after tides overwhelming senses. The undulating shiver that beats a blackened heart, fluctuating your pulse, making it nearly physically uncomfortable, flows beneath so that even if you can adjust to the darkness you can never settle.

They're still in the realms of Portal, but taking an undoubted leap up from the demo. There are brief breaks from the barrage, such as half way through Graehence, welcome relief for the ears but also in the change from the mean, required along a full album. Altarage regularly display their growth and begin to develop an identity beyond the obvious comparisons across Nihl. The demo tracks are here again, including the instantly memorable Altars, and the closing Cultus is the best offering of the lot.

An enthralling take on death metal, an obsessive sonic weapon, that I find hard to explain why I find so engrossing. The take no prisoner outlook, where every listener is a potential victim, that mindset that similarly stains the work of Dragged into Sunlight or even Revenge; Altarage pound away, the constant sound offering little respite for breath or light. The demo hinted at it, the album steps further forward and ordains Altarage in their own right as true purveyors of convictive, destructive noise warrior death. Still punishing, still ever so strangely addictive.