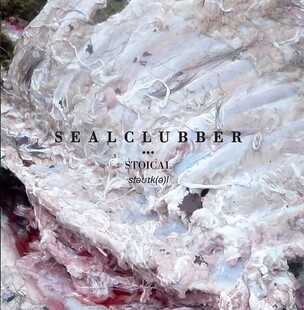 Cutting straight to the point - the pleasantly titled Sealclubber (I'm imagining the former Mr Heidi Klum raving away, right?) will explode into the consciousness of British extremity within our beloved pastures of sludge, post-metal, hardcore and doom engineered crop, with the release of this, their debut album early next year.

Their potential was hinted at on the two track taster Sticky River on Witch Hunter Records a couple of years ago, but unless I've missed anything, they've been largely quiet since, presumably amassing all energy towards Stoical's weight.

A potent compound of the dredged sludge depths and post-metal largess, adding in early Baroness and abrasive Cursed influences, this goes the rounds incorporating a venomous recipe of broad input, one that crucially blends well, sounding not contrived but as an entity of it's own. It has that sense of grandness that their fellow midlanders, and seemingly friends Opium Lord already display, and will appeal to those taken with Trudger's output.

The initiating Tales of a Romanian Horse Whisperer is invested in showing you round their houses, showcasing their various genre stylistic changes, meriting sticking with throughout it's nine minute plus to the very end. Haima's hardcore incursion rumbles forward, glorious Will Haven-ish riffs underpinning, while Catalogue of Failings is utter sludgey goodness. Closing I Only Desire the Things That Destroy Me is delicately constructed, post metal atmospherics meandering forth toward a predictable but still gripping outpouring.

Sharply focussed, bristling with provocative intent, Sealclubber's early but brief promise has been realised to the full.