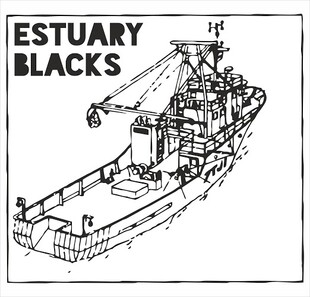 There seems to have been a revivalist stirring in the Welsh waters of late, with many of the most insiprational bands from over the border from around a decade ago reappearing - Suns of Thunder and The Death of Her Money gigging again added to Hark's rising from the ashes of Taint being the most obvious, and thrilling examples.

Estuary Blacks further that trend, featuring members of the less feted but underrated Bomb the Sun, who played a Sheffield ninehertz gig for us with Suns back in the day. This self titled demo is only two tracks long, yet in the near twenty minutes instantly marks them as a real prospect for something special. Pushing themselves forward as a progressive stoner rock trio, the experience of years spent playing music of similar ilk is evident in the maturity throughout.

Damn Your Eyes pitches between the laid-back, cultivated modern take on stoner and the boldness in writing of post-hardcore, reminding me a little of moments from the Sweet Cobra album earlier this year. The opening half breezes past most pleasantly, the grandstand of riff and guitar expertise that sweeps you up in the second quite breathtaking. As debut offerings go, this is some sales pitch, a majestic eye opener.

Missing Persons is mellower fare, with a faint psych haze over the drawn out build, never rushed, at ease, at it's own pace. It brings to mind Sheffield's Baba Naga, especially when it kicks on seven minutes in.

Along with Old Man Lizard, this is the British take on arguably the only credible path for stoner rock in our current time, and with both band's offerings in 2015 they are a credit to us all, examplary melodious and sophisticated rock music. Of course, stoner is probably not the accurate term at all anyway, but let me not get tied up in genre titles or boundaries, as Estuary Blacks have placed a marker, this demo a sterling introduction.