Old Skin Beneath the Trees 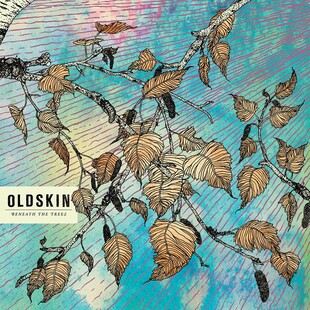 I have a love/hate relationship with Manchester. Being brought up supporting Liverpool FC in a suburb-by-train of Manchester, in the post-Hacienda era of national Oasis obsession, to living in Salford for several years, I have adored and loathed the city in equal measure.

For all the size and cultural wealth the city has to offer, it has never delivered in terms of music for my ears as it should've. Only recently things have begun to change. Bands are arguably still thin on quality, but the promoter scene has blossomed, and labels such as Church of Fuck are brightening the appeal.

It is from the stable of CoF (as they are known nowadays) that Old Skin rise, blasting forth this album of aggressive heartfelt bludgeonry of hardcore. This is the hardcore underground - this is the essential sound that should resonate nationally. Beneath the Trees is a phenomenally confident and determined record that deserves widespread recognition, an album that you can lose yourself to for days.

Deadfall's depressive "a perfect place of gloom" lyrics and belligerent riff-heavy surge lead the way; you know you're strapped into a ride you can't depart, fear and thrill emotional distress disregarded. Antibes raises the bar further, a begrimed mix of hardcore dirt and post-metal uplift. You're drawn in throughout, the raucous Bury Me bringing a special release to an appropriately grand ending.

Channeling their neighbours including the cross genre appeal of the sheer brilliance exhibited by Hammers at their Vardogr best, the brief tenure of Pine Barrens and with nods towards CoF-alumni Trudger (South Yorkshire bred but now red-rose based), Old Skin have triumphed with an album of staggering maturity and appeal.

So here is an outstanding album of Mancunian origin, a bold marker, a flagship of hardcore excellence. Only it turns out Old Skin have already split, are no more, releasing this now posthumously. Much like Hammers before them, they've gone well before their time, leaving a gaping hole of promise in the northern hardcore scene. As the album ends with the cathartic, earnest refrain of "for what I've done, or failed to do, I'm sorry" you're left both exhilarated, and maddened by the knowledge of their demise. Fucking hell Manchester, you always do it, you temptress, you bastard.

Forums - Reviews and Articles - Old Skin - Beneath the Trees