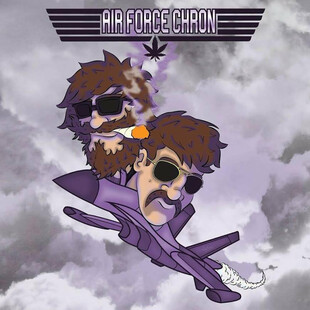 Only Sheffield could create a band that's this simultaneously stupid and awesome at the same time. Imagine if Cypress Hill listened to so much Black Sabbath that they didn't just sample them, they plugged into huge stacks and also got into Sleep. James and Mike, formerly of Sheffield prog-infused post metallers Naisian have been ploughing their stoner/doom riffs around Sheffield for about a year now and live it's a pure worship session for both the green and the riff.

This doesn't however make this a moronic Anselmo aping mess like it could so easily be from that description. Nope, this is tongue in cheek territory, but with some serious chops. Overdriven bass and sluggish drums combine with some pretty blissed out vocals to create a vortex of fuzz and lyrics that manage to sound both cliched and internet meme-baiting at the same time. This is the band equivalent of those BLAZE IT 420 FAGIT videos with airhorns going off every few seconds and sunglasses lowering onto people's faces with captions like 'DEAL WITH IT' and 'FUK U MOM' appearing below. Yet, somehow it's just so much more.

The riffs here are ten times better than some doom bands who currently rule the doom roost, the production calls out like a be-robed wizard and the vocals ring with an Ozzy-esque honesty that lifts it above the squalid and ridiculous. The ending to the deeply silly Necrochronibong apes Sunn 0))) but keeps things interesting. They often say that to play slow is more difficult than flying fast and breakneck, but you wouldn't know it here.

AFC make a conflicting sound, one that rings with frat boy humour at one end, and the vicious jaws of doom on the other. They've managed to make it a great split and confuse the hell out of this reviewer both on record and live. Check the video below too, all angles and lasers and bad lighting, it's designed to confuse and irritate and I think I've fallen for it.

You can be as confused as I am on December 4 when this comes out on CRTN DTH Records, a label that's sprung out of Sheffield DIY institution Tye Dye Tapes, their other release was the excellent pjaro's Softcore which sold out in two weeks.