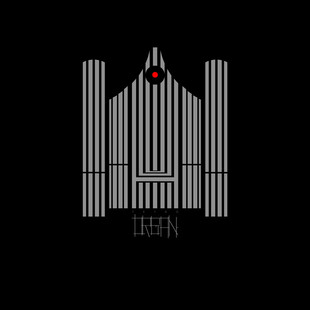 Woah, this is something... a lurching, mind blowing expansion on the modern doom theme from out of nowhere (or Belluno, Italy, to be more accurate). Fusing the pretensions of Om and countrymen Ufomammut's grand designs to darker, heavier doom surroundings, Organ create kaleidoscopic swirls that spiral toward a pitch black night sky.

Slave Ship opens, slow, rolling over and over mechanically battering away each cycle. Relentlessly onwards, trudging a path forward, it conjures up psychedelic overlays to create a dense cloud, lulling you into a daze no doubt to make you more pliable for some sinister attack; magnificent in its grandiosity. A further grand psych-doom riff greets you on the opening of Witch House, brilliant again. There are similarities to the likes of Monolord, but a step or two to the side; Organ creating their own elbow room of originality in a busy crowd. The closing Enuma Any Enlil is the least automaton repetitiveness of the lot, but grander still with a post-metal sheen, Neurosis-hinting boldness.

I haven't been so startling taken in by an unknown band to me in terms of such trippy heaviness since I received the Toner Low debut a decade ago. The blend of the controlled metronome with the free flowing hypnosis, such as on Kholat Syakhi but to be honest evident throughout, sets this apart from and above many of the multitude of doom albums of the year, the contrast truly engaging.