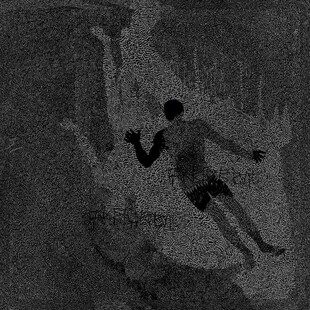 Wow, that was quick. No sooner have we reviewed Groak's debut, they are back with a tempting split bit of wax. Actually, Split Bit of Wax sounds like a song title Groak would come up with.

Anyway, their actual track, which slithers out like their previous vomitous debut is D.brevis and also creates that bilious and horrific feedback soup they laid out before. Like your fave AmRep bands borne out of Leeds frustration and suburban desperation, it barely creeps above a crawl for most of its brief timescale, like cleaning an oven, you're going to get greasy and disgusted with what you find. This is sludge if you have a dodgy gut and tinnitus.

Lugubrious Children are in contrast like a vine compilation of snuff movies. Fast and to the point, they bludgeon not unlike Benumb, but also have a splatterhouse, grindy style to them too. Their side of the split should come with a warning, in bold letters THERE'S FIVE SONGS ON THIS SIDE, PAY ATTENTION THEY'LL BE OVER SOON.

Seriously, only two of them break the minute mark and even then if you even think about leaving the room you miss the sheer painstaking fastness and rage on display. Sure, it's overfamiliar stuff, blastbeats, then chugs, screaming and feedback but who cares when it's this searing and to the point? This is music to get your pint spilled to and to get pushed around in a badly-lit room to.