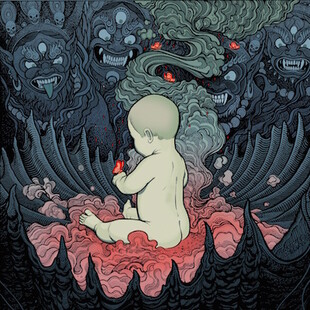 With The Quiet Observer, The Ocean navigate the listener through a series of motifs. The influence of tour mates Mono is immediately apparent as a soft, delayed melody whispers through the purposeful percussion. The group’s use of supplementary orchestration is well-established, so the mournful strings which lead the opening section are almost expected and permit the vocal performance of Loïc Rossetti to establish itself as the track’s most distinctive attribute.

His delivery is earnest if more than a little raw at times, but to great sympathetic effect. The use of stereo panning allows for the clean, Middle Eastern-tinted melodies through to the fore, painting the distant roars as a response to the call. The structure of the chorus is particularly playful, shifting on and off the beat and between clean, harmonised and harsh vocals, and becomes engrained by its third appearance.

Remaining on a similar dynamic level, the listener is allowed a few gasps of air between the crests of the waves. The constant yet subtle use of odd time signatures at no stage feels anything less than innate, but a short sample which instructs one to “do something useful and go kill yourself” contrasts with the otherwise consistent tone. The bridge breathes a warmer colour into a resolutely gloomy song, before its highest tide breaks into a barefaced guitar solo. A seasoned post-metal fan may expect a bigger pay-off later in the song, but it doesn’t appear; instead, the musicians ultimately and sequentially succumb, and the listener is washed ashore.

Mono greet the doused explorer with two movements of Death in Reverse: a gradual, hopeful crescendo and a sparse, thoughtful progression through four cycled chords. Whereas The Ocean opted for an Eastern flavour, the Japanese post-rockers are keener to build walls of guitar akin to NYC’s Glenn Branca. The first movement confidently grows before the seemingly ceaseless snare roll subsides to allow a full beat to carry the song for a (markedly) few blissful bars, although it doesn’t truly feel as though the group have a musical destination in sight.

Luckily, a subdued string section embellishes the second movement in a markedly similar tone to that which opens The Quiet Observer, tying the collaboration together. An ethereal glockenspiel melody closes the track in a subdued yet contrastingly purposeful manner, and perhaps encourages creative speculation as to the title of the piece.

The tracks on Transcendental are far from spiritually rewarding, but are very much each other’s Yin and Yang. As a touring partnership, however, the dynamics are in place for balanced and almost intrinsically emotional pairing of performances.