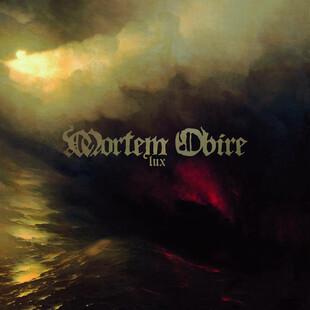 Some plucky Bandcamp user has already hit the nail on the head with a comment on Mortem Obire's profile, 'Hypnotoad meets Pink Floyd's "Time" played from within limbo' but that doesn't quite end the description that Lux deserves.

Drone of the most doom-like quality, this is reverb central and has that lashing, punishing feel early Sunn 0))) albums had. You know the one, the will-they, won't-they crush the riff now factor, the vibration-centric wall of sound that you only get with guitars. But wait, there's more on hand here than you'd first imagine. Subtle string arrangements, mournful and deep plague the drone landscape like wraiths, and big crashes roll in and out now and again to create a mesmeric effect. The three movements recorded here are long and daunting, but having spent an hour with them, you feel refreshed and uplifted, not unlike braving a dark and powerful storm.

The more orchestral Denier which takes the middle twenty-six minutes here has the most influences from outside the drone genre, sounding not unlike the ever-evil Akercocke's more ambient moments, a truly beautiful and threatening dichotomy taking place, which renders the listener rapt and wholly scared in equal measure. There's a high pitch at work here too that chimes in a sinister manner with the churning, bucolic undertow to create what does sound like a hellish journey underground.

Closing piece Earthshaker brings in the minimal doom references with a barely-there drummer that taps away at bass pedal and cymbals in slow succession to bring a sense of order to the chaos. Not unlike conducting a swarm of malevolent insects, this piecemeal percussion adds tension to the music, which continues to produce somewhat infinite loops and a feeling of dread as it spirals on.

A cautious approach is needed with this one, don't immerse yourself too deeply, you may not come back out.