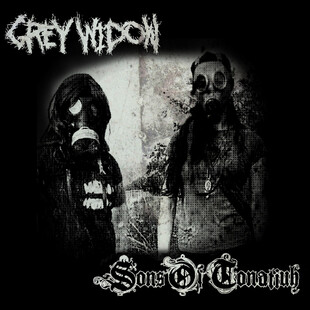 See your loved ones off safely to bed, lock your doors, adorn ear protection if that is your choosing. Grey Widow's recorded return is certainly highly anticipated, but requires not only the right atmosphere to delve into but presumably a local council health warning certificate.

Operating in the stench filled waters dredged by Indian and Lord Mantis, a new Grey Widow release already demands your time to absorb yourself within, to filthy yourself downwards into the depraved depths. This split offers me not only quick gratification on that fix required from last year's debut, but the chance to check out Sons of Tonatiuh, from Atlanta.

My love for Grey Widow only grows with the opening X. Their skill is in the prescience to embolden the blackened swamp mire with gloriously debased riffs elevating themselves beyond mere nihilistic noise mongers. Wallow in the quagmire of ugliness they may, but all the while kicking and screaming a force fiercely alive; devilishly possessed. Their sound is so immersive, so encompassing, it makes it hard to disassociate yourself from the claustraphobic net cast, closing off all other sense input. Much more of this standard and Grey Widow will quickly become one of the most important British bands of the underground. Obey is more of the same, pure bludgeon.

Anything put against this bar Gnaw Their Tongues style depravity would struggle, so it takes a couple of tracks, or a couple of play throughs skipping the Grey Widow side to give Sons of Tonatiuh ther full due. It's recommended though - play them alone and a different beast reveals itself.

The gargantuan sludge fight of Skull File is eclipsed only by the raw crusty doom unwholesomeness of Sun Goes Down, a rolling riffing energy concentrate that erupts in controlled outbursts, a wise and measured beast of sludgey aggression that draws you back, and again.

A welcome return and a new band to investigate - as often found as the initiation of many a great split release. While there's a jolt to the senses in the move from the British half to the American, sitting in with this for a while pays dividends, a perfectly fused meeting of subtly distinct aggressive sludge philosophies.