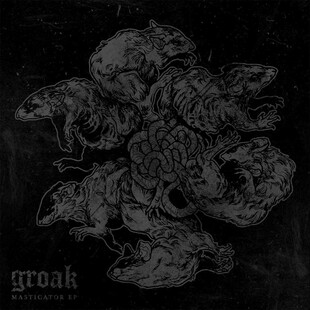 Groak are one of those names that have cropped up and been in circulation for a few months now, spotting the onomatopoeic name on lineups of shows recently, it was only a matter of time until their music came into view for us right?

Leeds-based and painted as sludge by all and sundry, what we actually have here is a crusty, filthy sludge band with a smeared, punk influence that's pretty refreshing. Not that sludge is meant to soothe or awaken, but hearing something this raging is a welcome change from a long procession of bland, uninspired dross.

With a style that comes across not unlike Kylesa gone ketamine, Groak lurch forward with heads down and two vocalists that complement each other perfectly, an equally battered and bruised ying and yang as it were. The parts where the two scream almost a capella on Despite The Gawker are inspired, the tension is palatable.

The pace remains slow throughout, that black cloud feeling some sludge bands sometimes bypass is maintained, you know the one, where it feels as if the guitars are being wrung dry of any moisture, twisted until breaking point and almost being punished for even existing? Yeah, that.

The lyrics, when you can decipher the strained and desperate screams, are on another level from the usual too, the aforementioned Despite... seems to be a strange nightmare vision of Oliver Twist with nonsense like Crumbled lattice, stuffed with sin/ cram a slice in, to your gullet/ Liquid melted, thick encrusted/ chewed correctly, never trusted suggesting some sort of unpalatable gastronomy.

This theme continues, this bowels and all honesty, with Gastric Interruptions following sickening suit Dull flavours/ turgid/ mind wanders/ knackered. It's like living in a sludgey world where Carcass were obsessed with indigestion instead of decay and cutting flesh, quite bizarre.

With such an honestly unique sound and a mastery of the key elements of their genre from the start, Groak seem to be offering something that's missing from a genre that often looks elsewhere to find new ideas and has recently seen more of an inevitable bastardisation of itself. Great to hear something that revitalises a genre that can sometimes be fluid in scope. More songs in sludge should be about the digestion process, the very name of the genre demands more toilet humour and unpleasant, stark imagery. Groak are down in the dumps, but on this occasion, that's a good thing,