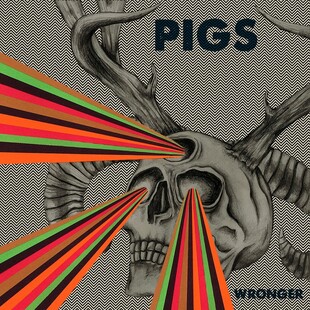 How do you expect a noise rock supergroup to sound? Especially one that features Dave Curran from Unsane, Jim Paradise from Player’s Club and Freshkills and producer Andrew Schneider (Cave In, Converge, Made Out of Babies, Unsane, Keelhaul)? Well brace yourselves, because it's as good as the lineup suggests.

Sounding like it's brick-built and indestructible from the start, Wronger has a sense of the creative reigns being cut and the three of them simply running free with ideas and a blunt, direct approach. Not sounding unlike the fierce machinations of Curran's day job, Pigs fly the flag for riffs as weapons.

This is gristly, rough stuff, with precise, clinical production making the gaps seem as menacing as the gargantuan guitar sound on display. With all this comes a refined, markedly clever underbelly. Witness the country stomp and recorded speech of Mouth Dump which brings to mind the political, nihilist attitude of Cursed, but with the stoner rock/AmRep tongue planted firmly in cheek during the surrounding songs. Vocals are a mix of barked and gruff rasps, which suits the bass-heavy and steamroller-like intensity on offer within the music.

There's even a bit of early Mastodon worship on the spiky Bug Boy which features the ever-unpredictable Julie Christmas from Made Out of Babies, who adds her cuteness-gone-mental shtick to proceedings, screeching a times, sounding like a Disney film the next as is her wont. She doesn't take over though, there's still plenty of the band's own imprint here, the perfect way to guest on someone's music is to make an impression like this rather than flood with your own influence.

The main thing to take away is a sense that although geared towards lovers of noise rock, this is perhaps one that will appeal to the post metal fans among us. Loud, heavy and undulating, there's an uncanny force at work somewhere underneath, daring you to find it.