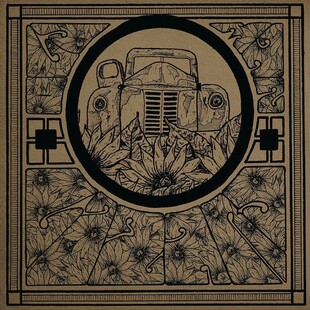 Now this is a tasty release, a South East English noise doom trio sent to us via Italian label Heavy Psych Sounds, from a band who's name is familiar but music I've largely unhead to this point. I had assumed as they were a side band, made up of members of other well known doom bands, this may not have been a fully commited concern and as such have been taken aback by how startlingly good this album is.

Old Man Lizard's sound is instantly reminiscent of Taint, and it stands one step to the side of easily pigeon holed genres much in the way the great Welsh trio did. It is tempting to suggest Old Man Lizard are primed to occupy the void left since their untimely demise, but I guess Hark may be on the phone if I did. Ally this to a whiff of the dirty riffs of 3 Stages of Pain, and this paints a decent portrait, one that puts Old Man Lizard in good company.

The songs are intelligent, agitable - it requires investment of your time and focus as it keeps paying dividend to the last of every track, songs offering twists to the end, a structural evolution each time that goes deep.

There is an almost blues tinge to set them apart from being simply Taint copyists, and an occasional stoner sheen to a few tracks (such as Fawza Falih) that marks this a shade apart. There's an almost noise rock belligerence abound at times, and brief glimpses of a British latter-day Baroness grandeur. Highlights arrive often, my current favourites being the storming opener Cold Winter Blues, the immense whirlwind of Old Hag and the epic Craniopagus Parasiticus, but they run throughout.

Classy, well rounded in terms of depth and consistency, this has come as something of a surprise as toward it's quality. It shouldn't - band members of Slabdragger and Meadows, a previous split with Earthmass and coming from the furtive Suffolk scene should have buffed preconceptions, but then this is extremely good. 'Demanding repeat listens' is a hackneyed reviewing line but warranted here, not just to grasp the full mass of what's on offering, but simply as you'll come back again and again.