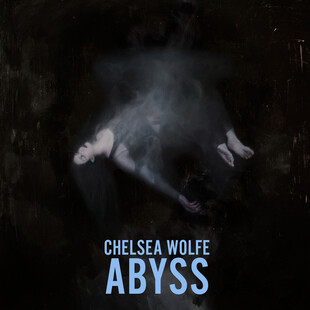 Chelsea Wolfe is a name that often appears in reference, on the periphery, linked to articles you read, touring with band members you follow, talked about in revered tones by those you respect. And that's from me as a doom fan - with the secret of her catalogue of successful work being that others from other genres unknowingly feeling the same way. Drawing from wide and far, Abyss is stunning in its reach and accumulation.

Chelsea's voice is as beautifully haunting as ever, bringing forward strong memories of PJ Harvey or Beth Gibbons, powerful and mysterious. The full scale of influence that has been alluded to for Wolfe's previous work is evident in a controlled storms of emotional maelstrom, the flecks of doom appearing here and there, the extreme metal connection not directly referenced but casting a shadow over the whole work, and the more mainstream musical output showcasing an intelligence and heart within.

Full on darkest-Depeche Mode synth flourishes and an almost post metal industrial mechanalism beats a darkened heart throughout, as if Justin Broadrick has wandered into the production, and exposing the input of Russian Circles' Mike Sullivan in the guitar slot. This juxtopasition, with the organic ethereal vocals provides the true strength of Abyss, one that will draw admirers from a wide circle of genres, many outside of their usual comfort zones.

This is a pulsating gothic masterpiece, gravitating all manner of sounds to an unlikely perfect whole. The sheer majesty of Iron Moon, the harrowing Dragged Out, the ghostly Survive - instantly cast iron classic tracks that linger long in your mind after hearing them, but in truth the album serves best as a whole, an outstanding, mood-alterating statement of beauty and discomfort.