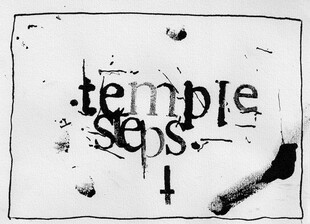 Roll up, stomp forth, black out - there's a new doom band on the block, and while that's no surprise these days, Lincoln's Temple Steps are well worthy of immediate devotion and deserving of mixing with the higher echelons of the British scene so vibrant.

Operating at the grimier end of the recent trend, Temple Steps will appeal to those missing Grimpen Mire's mire, and on the later tracks even draw in close to the desperation of Moloch. As a two piece, there's an obvious comparison to be drawn with Monolithian also, and this sits up there with the Cornish mob's ugly The Finest Day I Ever Lived... full length from earlier in the year.

There are moments where a shaft of Electric Wizard groove sparks through the murk, most notably on The Fish Have Teeth, but on the whole this grand introductory demo has a Thou-esque hulking, sludging and droning end of the world soundtrack quality.

Full disclosure time - half of Temple Steps (drummer and vocals) is comprised of the ninehertz editor, and my buddy who I love, Mike Shields. He doesn't know I'm reviewing it. I was always going to like this demo, for the style as well as connection, and will inevitably see them live tens of times over the next few years (I'm already three for three in their short gigging career to date). I'd like to think I'd love it and write with similiar praise without this, but I'd have doubts about my bias if I were you reading my review, so I urge you to make up your own mind instead via the bandcamp link below.