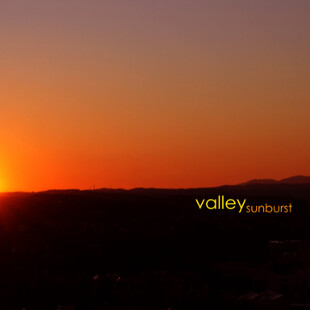 Sometimes stripping things back and just seeing what occurs can be the gift horse most bands look in the mouth. With trying to pitch-shift, quantise and auto-tune everything, just a jam recorded can sometimes catch your attention more.

Granted, Valley, a Swedish post rock band here sound perfect, but it feels so freeform and wide open you wonder how much was written before they hit the studio. The production is clear and rings with a gorgeous tone throughout, making Sunburst a euphoric, lovely whole.

Each track here rings with a lonely, but warm sound. The band recently told PopMatters that they strive for a sense of 'vemod' in each song. This is the Swedish word for sadness, making each understated flourish here come to the fore. There's a lot going on if you listen closely. With subtle drones flying gently under the whole, and the overall energy never rising into cliched breaking crescendo. The percussion is limited to tattoos of tribal wonder or the odd quiet accent.

The best description I can muster is that feeling of waking up on a day when the sky is bright, but grey and your eyes refuse to open fully. That half-waking feeling that you get is distilled here into that cold morning light. It's actually quite beautiful, but knowing it might not last for long is almost as good as it feels.

Each instrument here seems to shine through ridiculously bright, each note occupying its own space and sounding incredible for it. Just when you fear it might roll into something very typical, it veers off just slightly, like noticing an imperfection every time a wheel turns, there's that bump again, which way will it turn us? It's almost as of each player is following a dramatic script, telling a story in clear voices.

For reference points, think the quiet and minimal Rachels or Labradford, with a modern post rock sheen and even elements of Earth or the clockwork machinations of From Monument To Masses chiming in. Each listen reveals more going on than you previously considered and each realisation brings something profound to the surface. This could well be a release that vanishes without a trace, but I hope not, it deserves so much more.