Evil Blizzard Everybody Come To Church 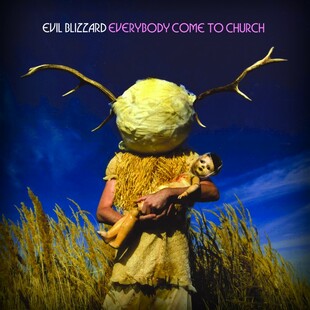 Trying to convey just how incredible Evil Blizzard are is hard to put into words, is it the repetition that seals it? Is it the catchy choruses or is it the jack-o-lantern scariness that plants them firmly in the 'fucking yes' camp?

It's hard to know.

Show me an opening song better than Are You Evil that's been released this year and I'll buy you a pint, hey I'll buy you your drinks for the night. Having seen these guys live, they are a heaving, bass-heavy proposition that pound their wares at you until you can't take any more. Here however, the studio magic has them sounding even more sinister and sneering. Vocals veer between Johnny Rotten snot-fests and creepy, croaky murder-fodder. The opening track alone has so many fist-in-the-air moments you might as well give up thinking about doing anything else as it runs riot from your stereo.

If you think they've climaxed a little early, you've underestimated the album's full stomp, Stupid People wails hard and the band's four bassists can all be heard. The more psychedelic and restrained Bow Down sounds more ritualistic, all mad priest and reverence until a payoff that sounds not unlike a barn dance in hell. Google some images of the band and witness their ugly mask visages, pigs, secret cousins, burn victims, whatever. It all takes on a very unsettling tone when you see the jigsaw fall into place.

If their debut was them crashing the feast, Everybody Come To Church is their strange mission statement and they are smearing the food into their bare chests and mocking all present.

Spread the Fear is nightmarish, voices all speak from different angles, while playful and mangled synths all collide and create viscous, glooping melodies all around. To write these guys off as a shlocky gimmick is to jump the (shot)gun. When the brass creeps in here, you know they aren't playing.

Sacrifice which appeared on their excellent split with Mamuthones and reviewed here sounds perfect in context, still sounding like the ramblings of a priest gouging out a warm, beating heart on temple steps.

All of this, and made under such strange circumstances, Richard McNamara of indie band Embrace (All You Good, Good People etc) recorded this in one day after seeing them destroy live. Add to this the fact the band rarely rehearse, meaning this perfect sound is achieved by feel and blind enthusiasm.

If you needed proof that the 'Blizzard are for real, ECTC is riveting, spontaneous proof.

Forums - Reviews and Articles - Evil Blizzard - Everybody Come To Church