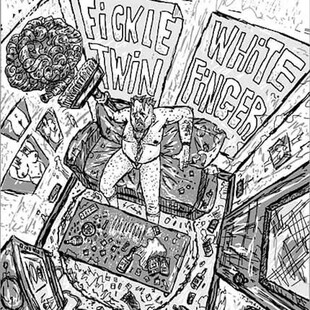 Fast food songs are too hard to come by these days, particularly in the snotty, post-punk way White Finger play them here, Slow Patty seems to come from the school of middle fingers and post-beer philosophising. There's a whole slew of bands like this rolling through at the moment, but these guys do the whole Pissed Jeans thing a bit better than most. This is the kind of thing you'd expect to see playing out at a house party, afraid to get near to the vocalist through fear of the vomit dribbling down onto his shirt. The guitars spiral all over the place, reflecting the obtuse lyrics that hark almost to comedic levels of The Wedding Present or Half Man Half Biscuit, see It's cocaine, versus kebabs.

Fickle Twin are a blast live, all fawning frontman and balls-out guitar. It's the same here, raw and just to the point. Can you say Stooges? Then you'll be able to say Fickle Twin too, but they ain't copyists, rather just upstarts with a desperate and sick approach. I Eat Shit is a self-loathing/self loving slice of fuck, whereas Clean Living sounds more like a drunken walk home, stopping to shout at war memorials and shops that have shut down. They say bands these days have more to shout about than ever, austerity, rank politics and dubious morals. Nonsense, some bands don't want to bother with other people's problems, they've got enough trouble looking after themselves.