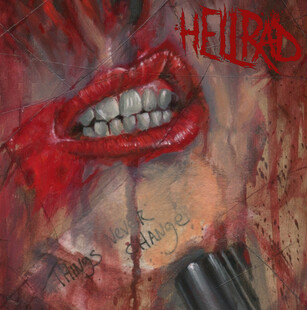 Hellrad appear to be one of those bands seemingly formed from the primeval swamp, the ooze dripping thick from this one.

Promises of stoner, doom and elements of other sonic extremity are promised, and for the most part this is delivered. The vocals ring with a distorted yowl that cuts through the often bass-heavy mix. It's by no means focused on one single style, that's for sure. One moment there's a big, posturing doom chord, the next there's sub-thrash breakdowns and metallic influences creeping in.

It's actually refreshing to hear something so blunt and brutal, but done with style. It sounds like massive fun to make. There's a primal, yet incredibly tight unit at work here. From the unrelenting staccato stabs of the likes of Homegrown Terrorist to the monolithic Fucked Up (All I'll Ever Be), Hellrad broker a line between delightfully messed up and incredibly refined. Their sense of chaos is tempered by some pretty rigid playing. This is doom for weirdos, stoner rock for outcasts and prog if prog grew horns and a mad, glinting stare.

Now and again they throw a time change in or ramp up their style to rage ahead uninhibited, during these forays it's hard to tell whether they are remaining in control or are letting something else inside take over. Abandon, hedonism and freedom seem to ring from the riffs here, who knows where you'll end up? There's some proper fist-in-the-air moments here, the sludge stylings of 15 Years and Counting are comparable with some of the murkiest stuff out there while remaining original. There's a sense that the vocalist is also exerting himself something rotten, frothing at the mouth and gripping a battered mic hard.

There's bands ploughing one message out there sometimes and it's always gratifying to hear a band doing something varied. Staying on one level doesn't seem to be Hellrad's way, instead it's a raging, schizophrenic debut here that kicks and spasms in the arms of medics as they are dragged away for their own good.