Funeral Horse Divinity for the Wicked 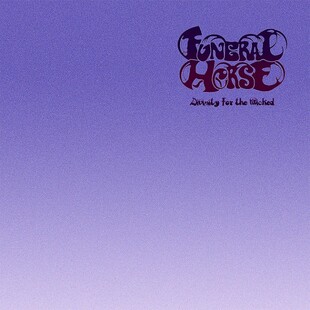 After a couple of releases that have pricked the conscious of any self-respecting internet-scouring stoner rock warrior but without leaving an overly lasting impression, Funeral Horse return with their all important third album. It is more than satisfying to report that they've nailed it, with a little gem of a record.

They've gone close to perfecting their sound, a lo fi stoner stomp with an old punk head on its drooped shoulders. The vocals, instantly definitive are purposefully, don't-give-a-fuck grainy and angry. There's a reminder of Drunk Horse here and there, married to some gorgeous tripped out mini-passages leaning towards Earthless territory, without fully submitting to the psych, the gravelly rock n roll containing a coarse hardcore attitude from decades past.

It's consistently enjoyable, but the high of the second half of Underneath All That Ever Was is majestic, a synth aided masterpiece. The band seem at ease, a confidence to allow an acoustic interlude to break up the flow early on (A Bit of Weed), which gives the album a rounded depth. See also how they piss around with false starts on Yigael's Wall, which annoys in the same way the ending to Supa Scoopa Mighty Scoop does, with a wry smile. The delicate Cities of the Red Light could be the sequel to Space Cadet from the same album, or perhaps the dune jams of Brant Bjork's seminal Jalamanta.

It's grittiness, a slight but detectable noise rock edge forced through a space rock filter, is what makes this so engaging and gives Funeral Horse an identity of their own. They have stepped up and released an album to hold aloft. As the bagpipes lead out the final track Gifts of Opium and Myrrh it feels like a fitting send off, a salute to a fantastic piece of work.

Forums - Reviews and Articles - Funeral Horse - Divinity for the Wicked