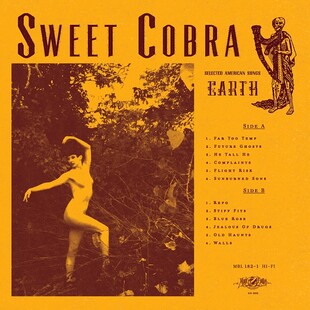 Ah Sweet Cobra return, great news. I remember when I used to get them confused with Black Cobra, and for some reason Red Fang. Their Forever album always popped up in my eBay searches or suggestions. I remember listening to...erm... and then it dawns - I've never actually heard them. How's this happened for a band whose name feels so familiar?

The Chicago three piece's new album Earth therefore gives me the chance to find out what I've been missing. It opens in stellar form, with Far Too Temps giving an impression of a post-hardcore band - think Handsome or Quicksand - experimenting with the maturer ends of stoner rock, Queens of the Stone Age being the most obvious calling card. The following Future Ghosts sets the other template that resonates throughout the album, one of brazen noise rock, in the mold of old school Unsane or a less aggro modern day KEN Mode.

It's a grand concoction, elbowing in between those two positions across the twelve tracks. Elsewhere Earth evokes Torche's less frantic moments, or more pertinently their predecessors in Floor or Cavity, and there's a nod to the odd of Harvey Milk on occasion. At times it turns inwards, feeling downbeat - such as Sunburned Sons which sounds like a rueful, hungover Josh Homme ode - while others sound boisterously happy, the Torche-ish pop rock of Blue Rose upping the pulse.

A brilliant album, mature and interesting yet not in a chin-stroking shoegaze patronising or boring way, those with an ear for post-hardcore, noise rock or the more developed end of stoner rock should be licking their lips. Not it's time for me to correct the wrongs of having not listening to their earlier material before now.