Howls of Ebb The Marrow Veil 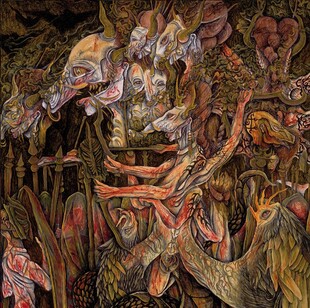 Howls of Ebb seem to just... appear from nowhere on The Marrow Veil, which bursts with a mysterious, uncanny menace from the very beginning.

Half-whispered voices, psychedelic churning and strange, effects-buried sounds start you off before the mood takes sombre and haunting paths away from any familiarity altogether. A black cat on the periphery of your vision, this music sounds as hallucinatory as it does pure evil. There's stabs of black metal sharpness here and there, strange and almost primal sludge at others.

The two 'movements' here are separated by a brief and equally strange segue, described by the band as blooming vines of ash. Whatever this abstraction conjures up, the sounds contained within are certainly ones which prick at your soul and reel you in like a prize catch.

Indeed, Iron Laurels, Woven in Rust swirls again at the edge of your psyche, burning slowly to sometimes finite ends, but looping back on itself to create new strands.

The introduction halfway through of a messy double-kick and grunted vocals harks back to the early and baffling albums from The Meads of Asphodel, minus the jihadi terrorism shtick.

This is something to delve into if your Hawkwind back catalogue feels a bit clean, this is of the earth and sounds as if it might have been buried deep since the 90s.

Forums - Reviews and Articles - Howls of Ebb - The Marrow Veil