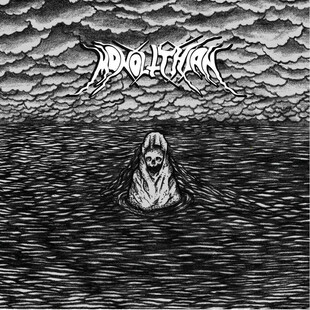 Monolithian return, welcomly, the Cornish duo having warmed my heart with the riff heavy darkened doom for a while now, and setting the imprint for Temples 2015 as one of the first sets there.

Set amongst their signature bassy doom atmosphere defined by their two piece status and honed across several previous releases, emerge other genre pointers and divergences - sludge elements appear, Black Flame Candle for example upping the pace deftly to bring Soilent Green comparisons in to focus, while elsewhere the harsh and over before you notice Shub Niggurath has a definite black metal influence.

The Lovecraft-ian title of the latter is a commonality across the album and lyrics, littered with gothic and fantasy inspiration, Treebeard being the other obvious calling point, the impassioned bellowed vocals, bemoaning Saruman and Isengard, sounding thunderously like it could be the anthropomorphic tree of the Tolkein title.

If anything it gets bleaker as it goes on. The penultimate Second of the Istari nasty with its slow/fast sludge/hardcore stop starts, and then the near thirteen minute Thought Out of Existence drones into despair.

The Finest Day... is ultimately to be defined as a fully pissed-off record, unceasing blackness without a glimpse of lightened respite. This is a solid, mature doom album, hugely impressive in it's towering relentlessness. I don't know the details of why, but their were dropped by Thirty Days of Night records (when they were dipping their toes into doom) before they released anything - whatever the reason, it's surely their loss. In a genre overflowing with bands trying similar things, Monolithian have an edge in a sound which is subtly but importantly theirs; distinctive and of a quality to hold their heads above the tide of miserability brought forth by the swell of doom in recent times.