Ommadon Empathy for the Wicked 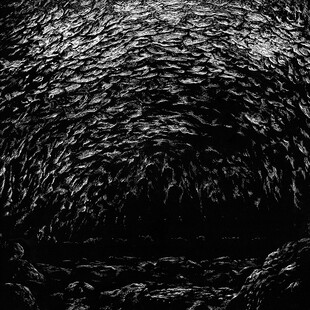 I've listened to, and tried to review Ommadon before. I really have, but how do you put into words a tangible feeling of dread?

I was sent their early releases III and IV and although magnificent in both scale and volume, I couldn't find words other than 'loud' or 'fuck' to accurately posit my feelings on them or to do them proper justice having enjoyed them immensely.

So this review is not only my apology to Tobin and Ewan (formerly of Snowblood fact fans) but a trial by words for myself.

Much praise has been heaped on the pair for their steadfast refusal to move faster than mere millimetres per hour and that is continued here.

For the unfamiliar, guitar and drums collide under a blinding blanket of noise, like negotiating a fog while an unseen engine roars off in the distance. So far, so steampunk, but what these hanging chords are serving up is no dress-up version of sludge, doom or drone. No, this is the evil end of the genre, no cod theatrics, no discernible identity, just seeing what comes out of the void.

The first, 47-minute track stretches out notes like conspirators being put to task on a medieval rack. The overarching waves of static noise serving to add a foreboding atmosphere over the top.

With volumes so high and tone being so thoroughly considered you can almost hear the fittings in the studio rattling, mugs moving across desks of their own volition, windows flexing involuntarily and distorting images through intense vibration. After around twenty minutes, you no longer pine for any more activity other than the somewhat reactive avenues this pair are investigating.

Vocals for example would be a distraction. The subtle changes that take place come as a suprise, so after milking a riff for five minutes or so, to hear a slight manoeuvre in another direction is a sea change. The few fills that drummer Ewan throws in once in an ice age are like waymarkers to new dead ends of sonic torture.

Often within the genre, a lack of cohesion or a sheer disdain for form can leave listeners cold. Not here, every section feels planned, even if the delivery seems ad-libbed to a casual listener.

The second track here fair vaults along compared to its flip-side, but with an even more haunting ambient backing. The noises conjured up are like incidental soundtracks for sci-fi films consigned to landfill, all half-broken synth ghosts and gushing, rushing water pipes which gives this whole affair a transcendental feeling. Not life-affirming, more a reminder that we are mortal.

You have to wonder what kind of a mind enjoys playing such crushingly bleak sounds for these extended periods. Or do you? It sounds like awesome fun, as well as cathartic therapy.

Only open this box if you are ready for commitment, in both senses of the word.

Forums - Reviews and Articles - Ommadon - Empathy for the Wicked