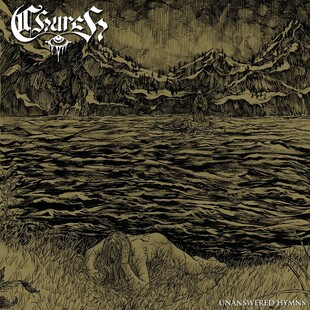 First impressions of Church are a little misleading. Having nailed this as modern hate filled splurge of Primitive Man proportions, via the album artwork, song lengths and even first few seconds listening, it opens and evolves to offer more than meets the eye.

Not that it's drastically different from that, but doom afficienados will notice the subtle difference. There's links to Acid King's output, a comparison extended beyond the female vocals to the drawn out doom patterns, but mixed againt the harsher end of nihilistic doom my preconceptions presumed, it creates an interesting juxtaposition. At one point I'm even thinking of Blood Ceremony, minus the retro theatrics; another, particularly on the closing Offering it feels like it's going to cave in on itself in a black hole of funeral doom deathliness.

The drawn out nature, particularly on Dawning are stretched out for aeons, ghostly, dreamy passages that get your mind wandering; SubRosa's fucked up cousins. Stargazer even has a Neurosis-ish structure to its DNA. It seems to get darker, uglier, consumed with rage as it goes on, but you sense a level of catharsis, of everything being pulled out and expunged.

Faults? When not in the exact mood the meandering can be a turn off - literally in you'll switch to something more immediate - and the production doesn't accentuate the quiter passages so the pay offs in the heavier returns don't hold as much power as they might. But ultimately it is an experience to revel in, a potent mix of light and dark, of beauty trying to hold it's head above water surrounded by despair. Unanswered Hymns is a doom album to wallow and immerse yourself within.