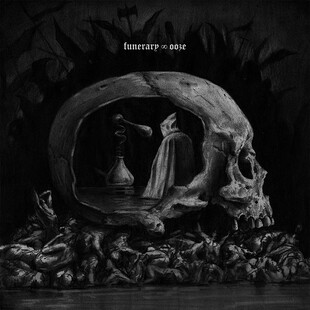 Jazz buffs often talk about the beauty of the notes you're not playing. That is, there's great gravitas in the singular and momentary silences between notes. In s similar way, there's a great, but ugly charm to the gaps in sludge and doom. Those notes stretched beyond what they should be capable of often leave gaps so large you can plan your next holiday between them. Such is the sound of Arizona-based Funerary.

The eight-minute, simplistic thump of Ascent is caveman-level sludge, truly just a fug of horrific feedback worship, dragging itself like a grim pendulum from one note to another. Just how we like it. The counterpoint is the similarly scraping and primal Descent which lets ambient dynamics take place at times, at least giving pause to the ongoing slaughter. This is dark, walk in the woods, hood up, head down music.

The vocals also serve as a desperate, maniacal feature, an unwavering presence to really compound the evil.

Ooze take their onomatopoeic name and sadly don't so much ooze like viscous liquid, but chug along like a metal band moving slowly. No bad thing if you like the style, but it could leave you cold. The aching drama of side one is lost here in croaky vocals and riffs that go nowhere. There's not much variety here, it all feels a bit cookie-cutter and predictable.

Not to be cruel to Ooze, but they reek of pub metal, there's not much nuance or creativity here and it's too straight-up blunt to have any blood-stirring presence. You could wander into most doom gigs and find a band like this warming up crowds already a bit limbered upon cheap pints.