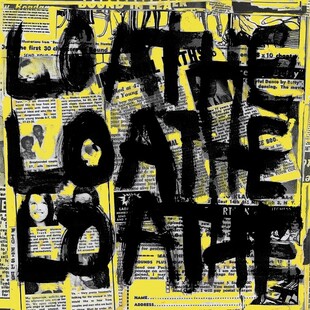 Ever fallen into a swirling abyss of piss and vomit? Your body sucked under, choking on all the baddest of bad shit. Eyes caked shut in liquid excrement, your mouth struggling for breath…

This, the follow up to 2013’s superbly titled Dismal Fucker, sees Dusseldorf 3-piece Nightslug upgrade their hateful artillery in quite some style. For Loathe is a sonic dustbin, a swirling mass of crushing guitars and bilious rage. Huge slabs of monolithic amp thuggery are dragged into the gutter by vocalist J.Slug’s heavily effected, spiralling vortex of blackened rage.

Opener Vile Pigs sets out the bands stall. Wailing feedback, b-movie samples, a stubbornly crushing, pugilistically stupid riff. It’s like primetime Buzzov*en crust-sludge, all knowing nihilism and rock-n-roll swagger. The cold and savage vocals decay slowly, sucked into a vortex of distorted hell. The production is gloriously in the red, in that fashion that made Knut’s Challenger such a headfuck, or Cult of Luna’s The Beyond so goddamn oppressive.

When they up the tempo, like on thrilling album standout Under a Bane, Nightslug hit a peak of maximum chaos. Riffs hack and slash, drums fall over themselves with all the velocity of a freight train at full tilt. It’s a primal gut punch of twisted crust-punk that would make His Hero Is Gone proud, and is this album’s absolute highlight.

With a blatant call back to late eighties/early nineties (and currently re-animated) industrial metal pioneers Godflesh, Nightslug’s Pure refreshes the ears. Clipped and looped bass grot locks into weighty industrial rhythm. A layer of sculpted audio-nastiness sarcastically drowns the track in malevolence. It may be a more incidental, throw-away curiosity of a track, but it shows a welcome eclecticism at work.

The album isn’t perfect. On more doom oriented tracks such as Desease or album closer Tainted Throne, the sub-Electric Wizard riffing is a little generic, lacking in dynamic, and clips the album of its wings when dragged out for 6 minutes-plus.

But really, when it all sounds this crushing, and is played with this much venom, who really gives a fuck?