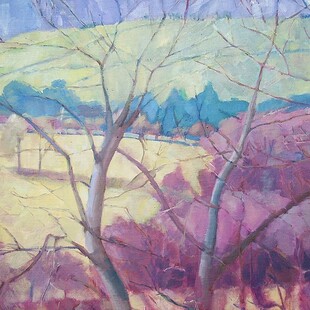 Herd Songs is the debut album by English math-inflected, post-hardcore three-piece, Elk. On board for production duties is one Karl Sveinsson, the Icelandic knob-twiddler more known for tackling coruscating, noise-bastard recordings for such heavy-hitters as South-London two-piece Ghold, and infamous Seattle tone-whore Dylan Carlson (Earth).

Guernica opens on a lush bed of pretty guitar loops before quickly diving into some choppy, off-kilter riffs and complicated licks, not unlike a mellow Fall of Troy, or a dancing Minus The Bear. The vocals of bass player Glenn Fisher, injects a bit of invective, whilst his partner up front, Thomas Conolly, brings the soothing sentimentalism. The layers of synth and guitars add depth and colour, and the rhythm section keeps everything suitably propelled. It’s a satisfying listen.

It’s a dynamic that thankfully informs the whole album, most notably on standout track, Yo El Rey, which stabs and slices with the heft of Cardiff luminaries, Jarcrew. The push and pull between the differing voices keeps things fresh and interesting, and stops the album from becoming unnecessarily saccharine, balancing the more Saves The Day-esque navel gazing moments with some real grit.

However, in places the production lets the team down. On Lonely Sister and Remedy frantic guitars and growling bass lines are muted. Hand-claps and synths are deployed, but mixed too low to offer much extra to proceedings. The parts are all there. They’re just not always presented in bold enough colours.

It’s frustrating, a missed opportunity. A glance at their bio highlights Friendly Fires as an influence. With that bands’ penchant for Konono no.1-esque afro-beat rhythms and dancefloor friendly subs, Friendly Fires would offer these layers in bright neon. Elk run the risk of painting in greys.

Things exponentially pick up towards the half-way point of the record. Once the listener hits Three Ships, we start to hear the band take control of their sound. Vocals have more colour to them, arrangements become more dynamic, and deftly so. Three Ships, Heliotrope and Herd Song are excellent cases in point. Arrangements are subtler, cleverly shifting. Vocals are warm and enveloping, the drums begin to sparkle a little more. The synths are pushed up front. The grey is gone.

It’s not such a hugely dramatic shift in sonic quality that it dwarves what has come before, but it is enough to make the listener notice the handful of underwhelming moments (and they are just moments) that fleetingly undermine the quality on show here.