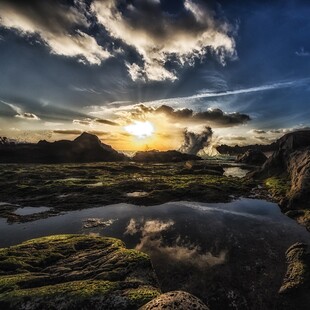 Sometimes I wish it was the 90s again, when you had to seek out bands through paper fanzines and word of mouth and you had to use the post or flyers physically forced into your hand to find new shit.

Then again, I don't miss dial-up internet, school or nu-metal. William English crush in that way that bands of that time did, think Hard To Swallow's hardcore bludgeoning and the metallic ten-ton hammer of Crowbar and bands of that ilk, y'know, heavy in a sludge way.

This comes from s time when guitars were held up like prizes pulled from slimy swamps. A few of these chaps used to be in one of Calculon Records' best signings, A Horse Called War, who were dirty, but not as fat as this.

There's some truly sludge sections here that turn into twin guitar romps but on the other hand there's blast beats that sound like bees trapped in an amped-up tin can and some hanging chords black metal nerds will devour.

There's even some great samples in there, in that overamped style grind bands used to squeeze them in over feedback and the way Bongzilla still do. The vocals are just nuts too, all part of the package. One moment it's Napalm Death style yammering, the next it's slightly brattish and slurred, never getting staid or dull.

The chugs at the end of Captain Tugboat are fucking righteous too, inspiring some old school head-nodding, before the morose trad doom intro of Grandpa Sorrow 1 takes hold sounding like The Obsessed gone sludge when it kicks off properly. It also brings back memories of the first Charger album's tortured subject matter and earnest screeching.

If you yearn for some old school sludge in a dirty function room pre-smoking-ban way, Billy British might be your new best mates.