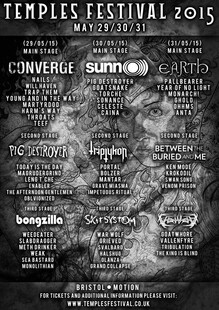 The second Temples Festival is nearly upon us, and after the rousing success of last year, where Electric Wizard, Neurosis and Clutch headlined over a tonne of extreme metal nastiness and ferocity, we're heading back more excited than ever. Now featuring three stages the line up is even more ambitious than before, with Converge, Sunn 0))) and Earth topping the three days above luminaries of darkness including Bongzilla, Voivod, Weedeater, Torche, Triptykon, Pig Destroyer and Today is the Day.

We decided to catch up with some of the bands playing the festival as a preview to their sets. First up, HALSHUG, frenetic and heavy Danish d-beat that has caught the eye of Greg Anderson as well as an increasingly wider audience worldwide.

ninehertz: It's fantastic news that you've signed for Southern Lord - how did you first hear about their interest?

Halshug: We actually wrote Greg an email when we were looking for labels to release the debut, and he responded quite quickly. He knew our previous label D-Takt & Råpunk Records and I guess that caught his attention, since he is known for not looking at that kind of emails. We didnt have any of the tracks from Blodets Bånd ready at that time so he basically signed us based on our EP Dödskontrol.

ninehertz: The album is superb - how has the reaction to it been?

Halshug: Thanks! Its been pretty overwhelming, since none of us expected it to get the kind of attention it has been getting. We've had several really great reviews in local news papers and sites like Terrorizer and Cvlt Nation has written a lot of great words about us. We worked really hard together with our producer Lasse Ballade to make the album sound exactly like we wanted it to sound, so it's great to get some recognition for all those hours. 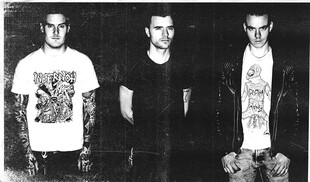 ninehertz: Is the Danish punk scene as vibrant as it appears from afar? Can you explain the "K-Town" scene/sound to those not in the know? Who else would you recommend we check out?

Halshug: It's kinda hard to tell if something is vibrant when you're in the middle of it. There are definitely many good acts on the scene, varying from straight up jock-hardcore to fine-arts punk with cellos and saxophones. There is never a week without at least a couple of shows, so compared to many cities of the same size it's probably doing ok.

What characterizes the K-town sound is mainly a thick Danish accent, but also some decent and catchy songwriting. And a LOT of it is produced by either Lasse Ballade of 'Hjertestop' or Peter Peter of The Sods.

Labeling stuff "K-Town Hardcore" was something that bands did around 10-15 years ago when there was suddenly a rupture of activity, or a reemergence of the punk scene. Bands like 'No Hope for The Kids', 'Young Wasteners', 'Gorilla Angreb', 'Hjertestop' and so on was the salt of that scene, which people now refer to as The Copenhagen 2nd wave. The K-town HC fest I still happening and it is huge, but hardly anyone calls their music K-town-HC anymore, and most of the KTxHC tattoos around have turned kind of blue. There are loads of new bands in the city all the time, but not the same sense of unity.

ninehertz: Can you describe your live show to those about to see you for the first time?

Halshug: We usually play pretty short shows. We play fast and don't make a lot of breaks between songs. We try to let the music be the center of attention and let it speak for it self. Not a lot of talking or explaining the songs. Our singer is also stuck to the bass, so we don't have a guy running around all over the place doing splits or grimy faces. We do an intense and furious show that should leave you feeling pretty cold and empty.

ninehertz:What have you heard about Temples, and what are your expectations for the festival?

Halshug: All we've heard about the festival is extremely positive. We expect it to be a metal-festival full of punks. There is so much good stuff on the line-up and we are really honored to have the opportunity to play it!

ninehertz: Will you prepare for or play a different set for a festival than a normal gig?

Halshug: No, probably not. Maybe play a bit longer than we normally would. 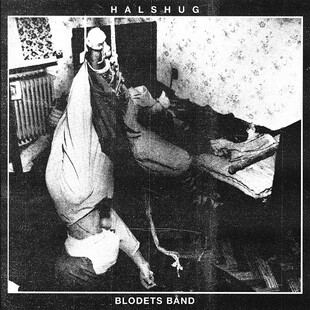 ninehertz: Last year's inaugural Temples had Doom and Wolfbrigade tearing up the second stage - how's it feel to follow on from them and fly the crust flag?

Halshug: It feels both like a great honor and a little ambivalent. They are absolutely great bands, no doubt about that! And the idea that we get to follow on from them and get to play their core audience is totally exiting. But we never saw our selves as crusties or flew the crust flag much, we consider our selves to be more just punks or hardcore kids. We found out only a couple years ago how cool it feels to play d-beat, and the aesthetics of our releases tend to match the crust-lingo to some extend, but to be considered a crust band was never really something we intended. Hence the ambivalence. Apart from that - huge honor to share stages with those bands.

ninehertz:It looks like you'll be on early in the afternoon, while the sun will still be shining and hangovers still festering - what would you suggest is the best way for Temples patrons to approach your set?

Halshug: It's difficult to suggest what anybody else what should do. If the sun is too bright, maybe wear sunglasses?

ninehertz: Who else are you looking forward to seeing?

Halshug: As many as we can before heading on on tour. But to mention a few: Skitsystem of course, and Converge. Bölzer is a pretty interesting band, Pig Destroyer even if they are old now, and very worth mentioning is Weak who are touring with Meth Drinker. Both incredibly good bands.

ninehertz: Beyond Temples, what are your touring plans for the new album?

Halshug: For starters we'll do a European tour that includes Temples. We'll be hitting a fair amount of cities Between London and Vienna, so there is a good chance that people can reach one of our shows if they are around Europe between May 25th and June 16th. After that we play Copenhell fest, Bloodshed fest and a couple of other things. What the future holds next, we have not yet decided.

ninehertz: Thanks again, really looking forward to being down the front on 30th May.

Halshug: Well, see you there. And thank you.