Tempel The Moon Lit Our Path 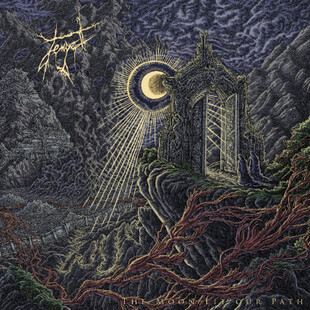 A concoction of genres, of sound, style and attitude is a hallmark of the exciting times we experience nowadays, where boundaries are not so much broken as ignored, bulldozed across as if all territory is there for anyone to plant their flag. Tempel typify this modern sound, a Phoenix instrumental two piece merely flaying across their influences wherever it leads.

My mind is early drawn to Black Cobra's belligerence - it holds true throughout, but I'm also aware of a lazy duo-reference. Sludge riffs with stoner leanings, black metal percussion triggering off kilter movement throughout; it has a median base within post-metal, bringing to mind Russian Circles or, inevitably, Pelican, but with the introspective meddling toned down, enough to please the doom-heads who always admired those dynamics but happily drifted away as the post- sound willfully dissappeared up it's own arse.

And that can all be summised from the first track, the emotively encapsulating Carvings in the Door. There's full on hostility evident in the all out metal of the title track, but it never stands still, never posing for effect or resting within an easily defined typeset (although admittedly overlong). Then there are the slight changes in tone, simmering from the downtuned thick sliced doom riffage to trimmed tradional metal sound. This goes on towards the fleeting but frequent recall of Pallbearer and their modern input of trad doom sound, interspersed with quicksteps that throw your bearing, and treading untentatively into the paths of Northern British bands such as My Dying Bride or Anathema in their early years.

Busking and hitchhiking across various metal genres, there is a sense of unpredictable momentum carrying the album forward, with the tracks lasting an average of ten minutes each it lends itself to making you feel like you're being taken on a trip blindfolded with destination unknown. The two piece have firm control however, plotting their path expertly to stitch it together, always inviting intrigue.

My only complaints are the occasional passages that lose themselves within their own meanderings, and the few times - and I know this isn't cool to say of an instrumental band - where you yearn for vocals to bolster and complete the sound. Those squibbles aside, The Moon Lit Our Path burns brightly, and seductively, attracting you to its blaze like a moth to a flame.

Forums - Reviews and Articles - Tempel - The Moon Lit Our Path