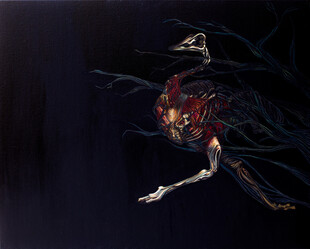 London-based and multi-national five-piece Strauss kick off their second EP with aplomb here.

Claiming a love for both Kyuss and Kylesa, they manage to encompass both but also strike an original seam of their own. Effectively blending stoner rock and doom is never easy, but Strauss manage to avoid the shitty tropes we so often encounter from dozens of bands a day appearing in the Ninehertz inbox.

There's an unrelenting, vicious energy to the sound Strauss create. It's an aggressive, chugging steamroller set of songs that take unexpected elements and fuse them into something that's very listenable.

Even slowing down doesn't diminish the energy they create, the crushing swathes of guitar on Humanphobic being a prime example. The vocals here are also exemplary, sounding strained but effective, and altogether wholly unique.

The likes of For All The Wrong Reasons also shows a proggish level of inventiveness, a multi-layered piece that crawls out of a swamp intro into an almost hammer horror stomper. It even manages to take in Thin Lizzy-esque leads and some 90s stoner rock vibes among the madness.

This is a puzzling listen however, what Strauss tend to do is hook you in, but leave you wanting more. Perhaps a more dynamic production could help, it all feels at one level. Some if the ideas in show here could drop like effective h-bombs but sometimes end up getting lost in a sea of unchanging volume and fuzz.

That said, you can't focus on this aspect for too long as it's all so engaging. An album will possibly be where we see these chaps fly, for now it's a head-nodding approved listen but we can't wait to see what they do next.