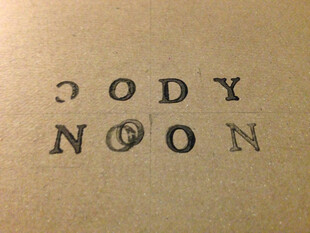 In mythical terms, a Manticore is defined by three key features: the body of a lion, the head of a man and the sting of a scorpion. It represents power, intellect and ultimately danger – a complex range of thoughts and emotions which can drive a physical and therefore potentially formidable figure. The concept of a Tiny Manticore therefore connotes an overwhelming sense of suppression, one of mental and physical dis-empowerment, where thoughts reside not on what could have been, but on what can be done considering the current situation.

Cody Noon aptly commence the above titled EP with a short repeated cycle of three simple notes, each respectively creating a sense of foreboding, suspense and finally a disarming vision of optimism. Minimalistic in its production, the two-piece compel everything on the record to fall under scrutiny, and by doing so they quietly establish themselves as a unit where subtlety and simplicity are key to success: every note, chord and electronic beat has been chosen to meet the constraints of the group’s self-constructed walls.

The unpunctuated strumming of Tactical Wales strongly resonates the hauntingly barren Don, Aman, but Cody Noon deny themselves the more dynamic qualities of Slint, opting instead to further the bounds of what can be produced in a situation of tighter constraint. Likewise, the sustained melodies of Participation hover somewhere slightly behind your field of vision; previous notions of foreboding and suspense are now coupled with a soothing beat, whose increasing familiarity belies the apparent danger and again disarms the listener.

Like the titular Tiny Manticore, Cody Noon have considered their situation and are making the most of their self-imposed restrictions, turning the likes of minimalism, repetition and downplayed atmosphere on the offensive. Through a relatively small amount of composition, they harness enough emotive power and delicate intellect to be considered at least as much of a danger as a regular-sized version of their mythical persona.