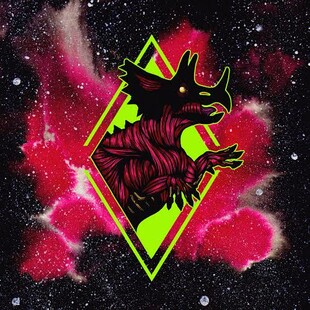 There was a time when practically every review of a two piece outfit, even for a doom band, could not steer away from references to the mad cap angularism of Lightning Bolt. The restrictions placed upon such outfits lead to the need for bassy gymnastics that invited the comparisons, which were often directly valid. Yet the last ten years, with the arrival of Black Cobra and many others, has broadened those limitations and opened up the four legged world to all manners of ugly noise.

Similarly quadrupedal, Vails, from Swansea, released an intriguing two track demo late last year, a racket of energy willfully smeared by feedback, not unsimilar in aspiration to the more direct barrages of Ghold. It's quickly obvious that Galactic Triceratops already shows an evolvement, a slightly different shade to Vails which is a surprise moving from demo to album in such a short space of time.

There is a lighter mood evident from the off, Sally's in Love clearer in the production, removing the doom and gloom. It's still heavy, but in a Big Business way, happy yet gruff, catchy but with riffs. The unavoidable bluntness of the bass, proudly up centre, gives it that eccentric sound that I alluded to at the start of the review, perhaps with a nod more to the German heroes of Beehoover or Dyse in that sense.

The title track, as well as being titularly silly in a way We or other bands wallowing in their early-Monster Magnet records might dream up, is actually fantastically sludgey stoner rock, while there's Melvins-ish enjoyment to be had throughout. The vocals carry with them a memory of Neil Fallon's (without apeing or resorting to an American accent) adding a further warm glow, padding comfortably atop the spikiness of the bass attack.

My only note of negativity is that I'd have liked a full on grim noise blast, that the demo hinted towards, a Monolithian-ian doom headache, mixed in, but perhaps it's all in the production and I was only ever hearing that in the wrong light all along. Released on When Planets Collide, this is a great little album, not overstaying within the orbit of any one typical two man band styles but tasting from here and there to create something their own.