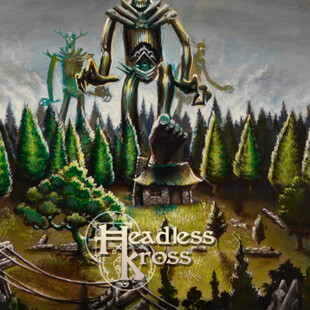 Headless Kross are seemingly one of the leading lights of the absorbing and toweringly pulsating doom movement north of the border, and this album, recorded at Skyhammer and to be released by Black Bow and Burning World will only cement that position and further their reach.

Opening with the twenty minute Rural Juror, you're immersed straight into a drugged, stained epic. A long psychy yet heavy intro leads you in, vocals enter but only add to the fog, it somehow feels even more doped than before. Swirling clouds of mind altering guitar enter you into a haze, the chunky riffs that appear and disappear - possibly for a few second but feels like an hour - never break the trance like state created. It's unrelenting ending of metronomic repetition blurs your peripheral vision further until it all breaks and you have a snap awakening - that moment of clarity during a dense trip that signifies you're on your way down.

Who Is This Who Is Coming may be eleven minutes plus but contains more immediate, more starkly venomous, spitefully attacked vocals, glorious sludge smatterings with hardcore throttle. The change shows Headless Kross in a different light, harsher fucked up punk rebrobates, but equally as impressively versitile with the ability to surprise and bring in variety to enliven and thrill. Even the Destroyed Things Have Been Destroyed is slow doom, with a faint nod towards the trad masters. It's my least favourite offering but largely as it sits less within my current tastes, but saying that the all or nothing, "leave it on the field" ending exerts all remaining reserves in an enjoyable thrashy blast.

So from the psychedelic to the crust tinged and on to an older vibe of the scene, Headless Kross cover plenty of doom bases in just three tracks. Yet it all amalgamates as an album in a bouquet of precision florestry, with their own imprint indelibly marked throughout, creating a record of breadth, beauty and devilment that is most certainly highly recommended.