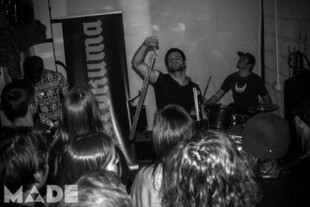 Kurokuma have burst on to the Sheffield metal scene seemingly from out of nowhere, curating a curious and excitingly fresh angle of sludge. Mike caught up with the band.

Firstly, as a relatively new Sheffield band you're standing out as doing something against the grain even for the sludgey/stoner rock quarter, what did you set out to do from the start with Kurokuma?

Jake (guitar and vocals): "Standing out in Sheffield isn't particularly difficult and it's not much more difficult to do in the wider sludge and doom scenes. As much as we love these genres, it's unfortunately not too far behind the kvlt black metal mindset that dictates that more of the same is always a good thing. There are various subgenres and offshoots, but outside of a few select bands, I think to say that either doom or sludge has evolved in a meaningful fashion is disingenuous. I don't give two shits what other local bands are doing - good luck to them and there's some that are great at their game. I hardly see competition from other British sludge/doom bands either - talented as they may sometimes be, the ones I know of fall into the previous bracket of reinventing the wheel. I can't say I set out to create the mindfuck we have, but now developing the potential we found in Kurokuma to eventually be on par with bands like Botanist or Jute Gyte in terms of sheer originality is definitely an aim."

Joe (drums): "It's personally not in my nature to repeat what's already been done. I'd been wanting to start a heavy project for years, but it had to be doing something new and original. I was smoking a lot of weed at the time we were putting plans together and really getting into music which reflected that, so the sludge/stoner/doom thing just came naturally. Seeing Conan at the Harley in 2013 was a big push in this direction as well."

George (bass and vocals): "When I replaced the last bassist I just wanted to play music as heavy as this. I'd never had the opportunity before."

Have particular bands led you to this point? Are you genre purists or do you listen to other bands/music too? 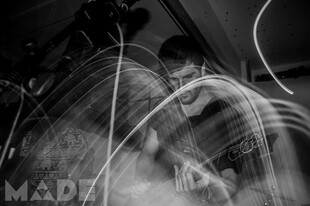 Jake: "In my opinion musical purists are artistically stunted individuals who will always be creatively under-developed. I can't imagine such a person making music that could ever be considered meaningful. I've spent the last year or so listening to mostly funk and disco with an ear constantly open for new releases that interest me. In terms of bands that influence me, attitude is more important than the sound itself. I credit Faith No More as being the biggest single musical influence I have: the chaotic diversity of styles, their unapologetic subversiveness, just a bunch of weirdos doing whatever the hell they want."

Joe: "I remember at the start I was particularly inspired by Conan, Electric Wizard, Black Tusk, Black Breath, and our sound is based in sludge/stoner/doom, but it probably makes up about 10% of what I listen to on a regular basis because most of it is so derivative. 80s metal is where it's at for me, and I find that much more relevant and powerful than most modern stuff. And I spend a lot of my time when I'm at home - or going out - listening to bass music, hardcore techno etc. To me that's usually far heavier and more extreme. I do think rock and metal, while thriving in some ways, are really failing to innovate much anymore."

There's a tribal element to your sound that recalls a trend from around 15 years ago when metal bands loved their repetitive percussion and getting lost in beats, where does this element in your sound come from?

Jake: "It's an element of psychedelia for me, which is a very important part of the music most listeners overlook. What are 'tribal' sounding elements? Things that bypass melody and explanation and go straight to your gut, to the part of the human body that was there before sentience or logic. And you can feel it, visceral and simultaneously grounding, yet transcendent. Look at some of the percussion use by The Boredoms, or the extended drum section in Neurosis' Enemy of the Sun. It's extremely powerful and barely utilised in rock music. As for the metal thing, Grotus' Slow Motion Apocalypse was certainly an influence in my desire to include this type of thing, as well as a lot of Latin American electronic cumbia styles."

George: "I absolutely love 90s Sepultura, especially songs like Territory, Refuse/Resist or Ratamahatta. I've also enjoyed that kind of percussion, as a percussionist myself."

Joe: "I used to play the taiko drum when I lived in Japan and I thought about trying to bring something like that into Kurokuma. When I mentioned it to Jake he wanted to do a similar thing and it went from there. We're leaning towards latin/samba-type rhythms and instruments at the moment because we enjoy the energy."

Where do you most enjoy playing? Smaller more intimate shows or large gigs? 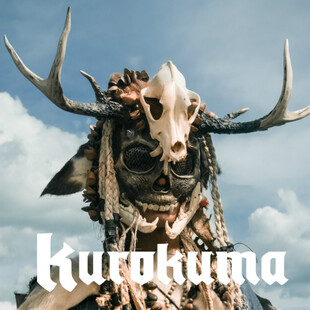 Jake: "We haven't played any large shows to date. The reception we've had at our shows so far though, even from people you wouldn't expect, has been fantastic. Maybe they're hearing things differently to what I intended when we wrote the music, but it's a pleasure to fill their ears with this stuff and get a positive reaction."

Joe: "Our best show so far was probably at the Washington where everyone was smashed and there was a real party atmosphere - that's a tiny venue. We want to play bigger shows and festivals and we will, but really the traditional gig circuit doesn't interest me too much. We love DIY venues and we're waiting for things to fall into place so we can do some of our own guerilla shows."

Can you each recommend us something to listen to that has impressed you in recent months?

Joe: "In terms of rock music, I've been listening to Nonstop Feeling by Turnstile a lot lately."

Have you got plans to record again soon? How are you releasing it this time?

Jake: "We will be releasing an EP later in the year, likely as a CD/digital release. Vinyl will come later. There's been some interest from smaller labels to handle distribution and promotion but we haven't committed yet."

Joe: "To be honest, we're still gonna be playing shows but we're gonna be slowing down a bit on the live front to get some material written and record something that might actually progress the sludge sound in some way - we don't feel there's too much new happening right now." 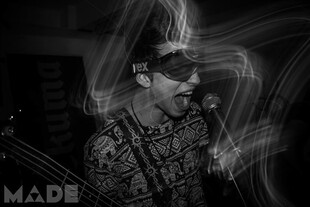 Jake: "The average person probably just listens to us and hears noise. That's what happens when you push the gain past 4. If I'm pushed, I always say it's like Black Sabbath an octave lower and at half the speed, which it isn't at all."

George: "I would say musically as heavy as early Mastodon, as tribal as Sepultura."

George: "OK, I'd say come to our show, it's something you've never heard before."

Joe: "I always go with Black Sabbath for a general idea, and, yeah, sometimes Mastodon if they're actually into music. Stressing we're loud and heavy is important, and I usually end up saying "You probably won't like it." Actually, this happened at the hairdresser's the other day - the hairdresser asked what my band sounded like and I said Mastodon and she didn't know them, but the guy in the chair next to me did and ended up saying he's gonna try and come to our next show."

If you could collaborate with another musician or artist who would it be?

George: "I'm not interested in collaborating with bigger bands, but I'd collaborate with Turcu, one of my best friends back home in Romania - he's one of the best musicians I've ever met. Although if I had the chance I'd have a drum-off with Brann Dailor."

Joe: "I still don't think we've nailed down our own sound yet to be honest."

Do you think a visual presence helps get your music across?

Jake: "Probably, if you're stoned enough."

George: "Ski glasses and a vest are things I've always worn on stage because I used to be a drummer and drummers don't get much attention usually."

Joe: "We're not really trying to do anything in particular that doesn't come naturally. I'd say attitude more than image is important to us, although that does end up affecting the visual aspect in some way obviously."

And to end, where's the name from?

Joe: "Like I said, I used to live in Japan and 'kurokuma' is Japanese for 'black bear'. When I lived in the north there was a famous waterfall nearby called Kurokuma Falls and that was the first time I came across the word. We're not particularly bothered about the meaning actually, but we wanted something that sounded exotic and original and it's got a decent rhythm to it."