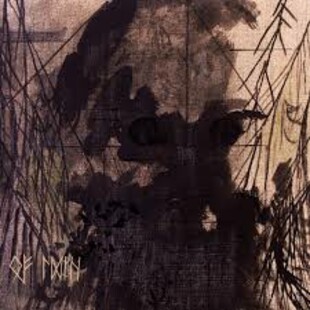 The name Ghold offers up many a pun for the lazy reviewer to bulk up and enliven a review - I've thought of thirty at least as I've been listening, obscure Henry Kelly links included - so please credit me for managing to avoid the obvious below.

Let me get to the point; Of Ruin is a gargantuan begrimed album, one that will sit in your collection like a goth at a rave, exhuding negative spirit and drawing all energy into the corner it has designated it's own. Carefully bridging the gap between drawn out, drone-ish doom and big riff energy (the opening Saw the Falling providing the contrast most starkly), Ghold engulf the listening experience in an encompassing fog that is often empowerlessly intrusive.

The negativity is only occasionally breached, as with Partaken Incarnate, allowing your gutter ridden self to glance towards the stars, before being dragged into the sewers, blanching the fleeting chance to climb upwards with a smearingly downer-induced ill intention forcing you in- and downwards. There's an eerie playfulness at work, such as on All Eyes Broken, toying with your state of mind.

Ghold's two piece structure is bewildering at times - as with the best of the four legged, how can they make such sound? - yet embraced in others, the dirge of Pursed openly celebrating the musical restrictions to create disheveled unholy doom. The closing duo of tracks betray their place amongst the otherwise nepotistic Ritual Productions label (11Paranoias, Bong) allowing drawn out desperation to elongate their message.

There is a reasonable debate going on at the moment whether the surge in doom in Britain has simply lead to a bulge in the lower, generic ends of the scene, but with music as (un)wholesomely involving as Ghold provide, alongside albums from, say, Bast, Ommadon and Grey Widow, with the added potential of Sea Bastard and Monolithian, to name just two, it proves that quality comes with quantity. But this review should end with focus squarely on Ghold, as this is a masterfully dark release, full of intrigue and depth and one to be lauded from the tallest turrets of the highest castles as a monument of its time and origin.