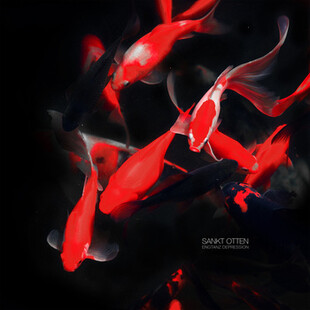 When presented with a new release by a German electronic band, it can be difficult for a reviewer to remain disconnected from the connotations invoked by an awareness of a place and its associated sound. The more indolent reviewer would fall back on such knowledge and the text would ultimately amounts to a comparative piece to Kraftwerk and Tangerine Dream rather than a referential one, in turn negating the rightful and self-established existence of the artist in question.

Indeed, on first hearing ‘Engtanz Depression’ the temptation to immediately draw such comparisons was strong, but Sankt Otten have tangibly established their own presence and identity over their previous seven albums, and their mainstay position on Denovali Records makes them more difficult to pigeon-hole. The two-piece sculpt a starker sound than many fellow Berlin-Schoolers; they seldom find themselves contemplating the bottomless nature of the subterranean, neither will they be found drifting through any vast cosmic emptiness – they rely instead on radiant, pulsar waves, minimalistic trip-hop beats and a readiness for restraint to create a sanguine atmosphere just below surface level, simultaneously allowing the striking artwork of the graceful Koi to mirror and enhance their location.

Grounded in their nature, Sankt Otten allow themselves such earthly pleasures as pseudo-improvisation, electronic crescendos and instrumental variance. The use of piano and harmonium, for example, adds to a rich, authentic spectrum of sound, fluctuating effortlessly between tracks as one might drift between dream states. The repetitive nature of the drum patterns allow for the melodies to progress and evolve, particularly in the mesmeric and labyrinthine ‘Sing die Apokalpyse’, closer adhering to the structural school of their antecedents from Düsseldorf, but with a rhythm section perhaps better suited to a club atmosphere than a jam scenario.

Even if Sankt Otten are inescapably standing on the shoulders of geographical giants, they have secured their own niche. Often, the group express the same attractive sense of intrigue as the soundtracks to John Carpenter’s films, particularly ‘Die tragische Nummer’. Rooted in the same decade, the contrasting use of synthesizers with more expressive instruments such as the E-bow in ‘Ich bau Dir ein Museum’ conveys a willingly explorative direction. The album ultimately concludes in a paradoxically matter-of-fact manner when compared to its tentative beginning, allowing this reviewer to find himself once again in present-tense England.