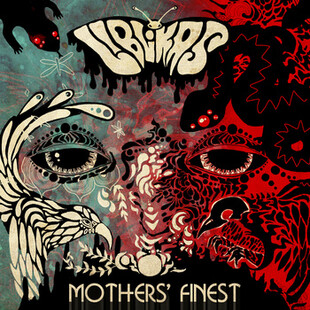 It's a thrill to find a release from an Estonian band in our inbox and encouraging that, in their own words, 'progressive stoner rock' is being played so wholeheartedly and with no little distinction or originality in the Baltic.

Mothers' Finest is Liblikas' second album, and encompasses a short 23 minutes across four tracks. As such, encountering what feels like an intro seems slightly odd, although the psychy roll, while not offering much to hook you in presumably acts as a mood setting space rock jam.

The pace is taken up in earnest on Stick to Your Guns!, but its unfortunately unenticing, brash stoner rock with gruff vocals too prominent, akin to Grifter but without the south coast Brits fun time groove. My mood towards the album diminished, its only the slight hints at subtlety beneath and between the vocals that hint towards the progressive self tag and keep you on to the second half.

Which is just as well, as it improves markedly. The vocals less high in the mix here no longer grate, and the big dirty stoner riff that rules the opening of Into the Shrine from a lofty throne is a thrilling jolt to your attention. They pique the interest further by giving the song room to breathe and develop, broadening the sound and engrossing unlike what came before. This is taken up further on the nine minute Spellbound sculpting slowly from the ground up in a way Baroness might, with a joyful reminder of Stubb towards its playfully delicate ending.

On the whole it lacks intricacy and sparkle to wholly impress, and is too raw to adequately explore the adventurous avenues they start off on. Yet you warm to the attempts to broaden the sound, which sets them apart from the derivative majority of modern stoner rock, and in the second half of the album provide a highlight or two you'll return to happily.