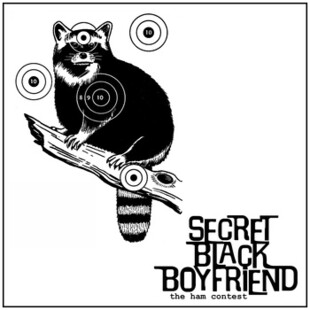 This debut album from Secret Black Boyfriend The Ham Contest is a truly DIY affair, not only in the fact that they recorded it themselves in just 6 hours and mixed and mastered it in 3 evenings (no fucking about as they say), but they also handmade all the CDs including special art pieces for people who to like to look at stuff whilst listening to stuff!

The Rushmoor Valley noise rock power trio, Johnny - KHz, Ben - Hz and Adam - BPM, unleash this six-track album in time for the new year and it's well worth a listen for anyone who's ever enjoyed the music of Shellac (which surely must be everyone!), Red Animal War and the White Octave.

This album really is a good listen all the way through with its overdriven bass lines powering through punchy drums and measured guitar from plunging Tool-esque dropped riffs all the way to absolutely filthy stabbing pulsating beats.

Standout songs include the excellent instrumental Jewish Gold which I feel kinda has a bit of Fugazi in its DNA and the epic Deadinburgh with a dare I say it Weezer-esque Hash Pipe riff (they'll hate me for saying that because it's really nothing like them) or that's just wishful thinking on my part!

On the whole this is full of energy and urgency and very enjoyable, worth a head-nodding half hour of anybody's time.