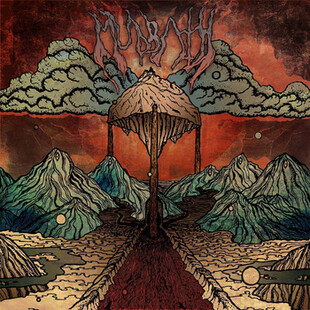 Here's another release on the quickly burgeoning Lost Pilgrim roster, which already boasts the raw delights of Rorcal, Fange, Plebeian Grandstand and others. Mudbath hail from Avignon in the South of France, and are a welcome addition not only to that list but to my consciousness.

Three tracks are stretched across well over half an hour, the prevailing theme one of darkened depressive doom. The opening Thus I Saw the Destructive Voracity of an Obsessive Ritual crawls along, slow, death throe vocals at its beginning, akin to the unearthliness of Primitive Man. It develops, an emotive engagement reaching through the grime, a superb and absorbing subtle change in approach, lightening a fraction right at the end in an almost post metal manner. It's a breathtaking beginning.

The drum assault that attacks from the off of Shrim Alternative Healing Centre and its slow burn eventually giving way to harsh blackened hardcore, as done so well by so many of their compatriots, erupting up and out. The 18 minute closing Salmonella again trudges along through sludge, slow but ever changing, constantly pulsating.

Underpinned by the primal desperation doom of Graves at Sea, but with a touch of Yob atmospheric layers, crowned with an unhealthy dosage of the fierceness of the likes of Celeste, Mudbath are a truly impressive proposition.