Every time I come to write the intro to our highlights of the year just passed I seem to state that it has been like no other, and 2014 is no exception - there has been so much amazing music released this year, with doom in particular the preeminent genre within metal, it's zeitgeist, all easier in availability than ever before that it feels like we're being spoilt. Here's the top ten tracks of the year (we're being contrary and not doing albums) from some of our staff: 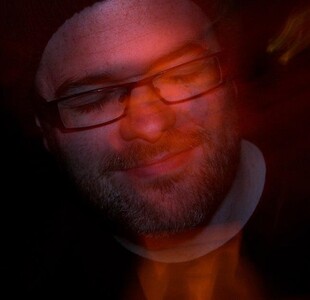 (from Horse Conduit; self released; Review)

"I'm yet to see Kick Nurse in action live but this track makes me want to witness them more. The dirty and drunken effort they make has reignited my faith in the slacker rock band, this is a great one to clear a party."

Today Is The Day - Discipline

"Anything from Animal Mother would have done fine, Steve Austin is back with one of his most scathing and vicious LPs in years. How he still has that fire inside we'll never know. Discipline? Perhaps."

"I caught this band at Sheffield's Tramlines festival this year. About five people in the crowd, beer spilling everywhere, it was the perfect antidote to the shabby indie and populist stuff that was drawing the hordes elsewhere. This song is a beer-swilling anthem, sure it sounds like Sleep, but who doesn't like Sleep?"

This Will Destroy You - New Topia

(from Another Language; Suicide Squeeze; Review)

"This new, fired up version of This Will Destroy You is one that you'd hardly recognise from their last LP. More ambitious, lively and daring this track is the epitome of their new sound. Starting from familiar calmness and exploding into astonishing sheets of sound, it's just epic in the truest sense."

"Mogwai are the great leveller among post rock fans, with many claiming they peaked early, every successive LP a dampener. False. Rave Tapes shows a band at an artistic crest and Remurdered is the dark and filmic lead track. Sounding weirdly organic and digital at once, it fills a b-movie shaped space full of threats and lurking menace." 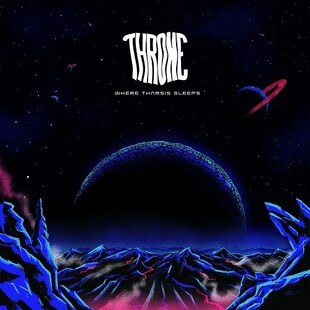 Ashtoreth and TCH - Angels Guide the Way to Our Harbor

(from Angels Guide the Way to Our Harbor; Deer Trail; Review)

"With Tim Holehouse winding up his wildly experimental and prolific TCH project this year it was a pleasure to hear one of his most engaging collaborations ever emerge towards the end. Countless split tapes, records and CD-Rs litter my record collection from Tim, but this is the best. Fully realised and beautiful with it, it might be my track of the year."

"This EP rarely left rotation this year, such rich, massive and ambitious textures from a duo who rise above other acts simply by aiming higher. Channel Fever is a standout that terrifies as well as rigidly sticking to its evil groove."

"As if Hey Colossus weren't prolific enough and the return of Part Chimp wasn't a treat already, members of both bands came a-knocking with a fantastic LP. The opener packs more into three minutes than most bands do in a few albums, dirty and unapologetic with it, great!"

Rosetta - Seven Years With Nothing To Show

"It's not easy to survive in a world where genres are stuffed to capacity, Rosetta have done this within the post metal stable by evolving. The EP this track is from is complex and slow to catch light, but when it does, it really does. This track combines their predeliction for both calm and chaos."

"Alright The Captain have been one of the hardest working bands this year, their album, out next year was funded by Kickstarter and they met their target in record time. This single is the only hint at its potential awesomeness but it's a really promising start, all pedal gymnastics and raging vocals, we like." 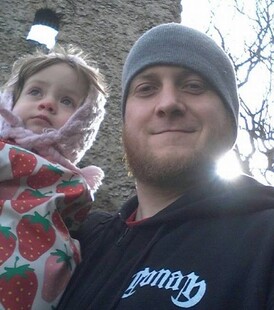 (from Passenger; All Black Recordings; Review)

"I could have chosen any track from Passenger, my album of the year, but went with the opener that has been a mainstay through my earphones all year long. This is modern black-doom metal at its sparkling absorbing best."

"Hopes were high for Bast's debut release and it more than lived up to expectations. The middle section of Denizens is a masterful, spine tingling, glorious representation of all that is good in British darkened doom, so good it gives me shivers."

Yob - Nothing to Win

(from Clearing the Path to Ascend; Neurot; Review)

"Clearing the Path... is a watershed album, a figurehead of the triumphant wave doom is riding worldwide right now. This track couldn't be called short (at 11 plus minutes), but it is the most immediate on offer and it's rolling thunder groove is infectious."

"Meadows are high on the list of many British bands to watch, owing as much as anything to their ability to mix in multiple metallic styles and still sound fresh. This perfectly encapsulates it - an eighty second adrenaline rush that barrages from one section to another with beer-stained recklessness."

"My musical preferences have taken a turn for the darker this year, but there's still room for a dance. BulBul provide the soundtrack, with their oddball genius perfected here." 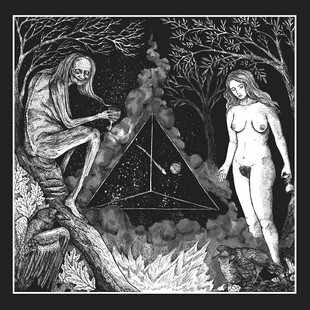 ""There is no mercy, absorbed by darkness and left in misery, your maker has betrayed you, your creator has left you, your prayers were not heard." Hexis did more than most to turn me towards darkness this year, the lyrics from this song encapsulating their negative approach."

"Amongst all the grimness, there was some great stoner and retro doom released this year - Stubb, Greenleaf, Baba Naga, Lo Pan, Electric Citizen etc. I've gone with Blues Pills to represent that shade of doom, as its Fleetwood Mac pop leanings into Sabbath territory are simply beautifully done."

(from Death by Burning; Svart; Review)

"To get what Mantar are about, listen to the consecutive tracks The Stoning and White Nights - lurching from mosh-happy punk to black metal infused doom without a care in the world. This track is their darkest, and incredible to think it comes from just two people."

(from I; self-released; Review)

"I had one space for hate filled destructive bleakness, and Grey Widow edged out Indian, Lord Mantis and Tombs, and not due to any patriotic fervour. As showcased perfectly on IV, their attack on any positive mood you may have been in is multi faceted and never relents."

"For my final slot I had to decide between Secret Cutter and Solar Halos, but went with the North Carolinans as their stonerish doom keeps bringing me back. It has a haunting numbness to it that feels quite beautiful." 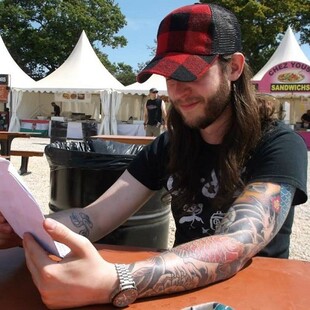 Joe Richards' (aka clatterbones) tracks of the year:

Swans - She Loves Us

(from To Be Kind; Young God)

"Horror has a face... and you must make a friend of horror."

A Silver Mt. Zion - Fuck Off Get Free (For the Island of Montreal)

(from Fuck Off Get Free We Pour Light On Everything; Constellation)

"You think this is a fuckin' costume? This is a way of life."

Jakob - Blind Them With Science

(from Sines; The Mylene Sheath)

"Why have you disturbed our sleep; awakened us from our ancient slumber?" 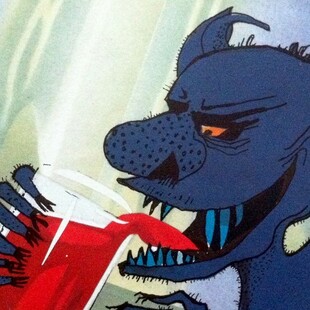 (from Run the Jewels 2; Mass Appeal)

"Okay, I realize there are a lot of serious problems in the world..."

(from In Each and Every One; Leaf)

"...now we gotta make the best of it, improvise, adapt to the environment."

(from Here and Nowhere Else; Wichita Recordings)

"Stop being so fucking calm about all this."

Mastodon - Diamond in the Witch House

(from Once More 'Round the Sun; Reprise)

"If I have seen further than others, it is by standing upon the shoulders of giants."

(from Dude Incredible; Touch and Go)

"You can have me as a professional colleague or as an outspoken outsider. Either way I'll probably still be viewed as a thorn." 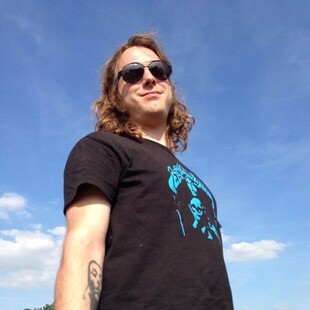 Steve Jones' (aka darkmatterbrain) tracks of the year:

(from Back From The Abyss; Candlelight)

(from A World Lit Only By Fire; Avalanche)

"Godflesh return to their bitter roots in this latest cut of urban rage and despair and heavier than a breezeblock dropped off a flyover."

(from The Application of Loneliness, Ignorance, Misery, Love and Despair - An Introspective of the Human Condition; Candlelight)

"A stunning ten minutes of relentless rifts driving the human spirit beyond adversity and into realisation."

"There’s something dangerous in them thar hills, and it’s Karma To Burn on the march again, with this dark dangerous and mysterious cut."

Electric Wizard – Funeral Of Your Mind

(from Time To Die; Witchfinder)

"Electric Wizard may be the swampiest heaviest jam on the planet, but underneath the acres of fuzz their songwriting craft can still shine through." 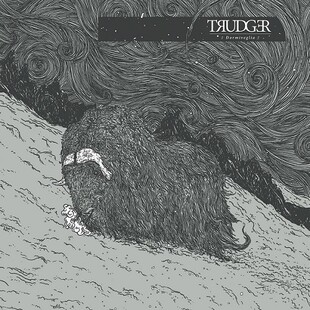 Animals As Leaders – Another Year

(from The Joy In Motion; Sumerian)

"Sure they can shred, but there’s real soul that no amount of a tech can match up to."

(from Dormiveglia; Chirch of Fuck)

"From seemingly out of nowhere (Barnsley), Trudger have forced Mastodon’s trickery through a prism of bleakness on their debut long-player."

Earth – There Is A Serpent Coming

Serpent Venom – The Penance You Pay

(from Of Things Seen And Unseen; The Church Within)

"This London outfit just get better and better. Rumbling and belligerent yet wise, this ranks up right up there with the original purveyors of classic doom."

"The final song on the album, and indeed a swan song for the end of an era: Uta Plotkin may have left, but together with her compatriots, she has left this beauty."