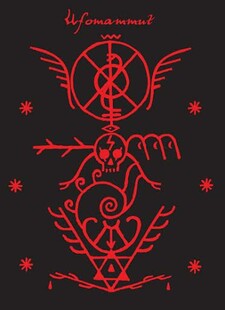 15 years is a hell of a long time to be in a band, but think what that means when that band is Ufomammut.

Bending time and space with instruments is no mean feat and with tunes that wallow in the psychedelia and magick rituals these three create, it's got to have been a mind-expanding ride. XV is a DVD that brings over three hours of footage alive, with a 12-song live set that encompasses their entire career since 1999 and their eight albums.

The documentary aspect of the DVD is one if the most in-depth and interesting we've ever seen. Charting the band's birth from the death of Poia and Urlo's former band, the rough and raw-sounding Judy Corda, the doc also gives multiple live recordings an airing.

A baffling amount of time is also given over to charting the many ill-fated keyboard players the band had in the early days, even giving each rejected member screen time to explain their time in Ufomammut. It's great to see the normally focused and serious trio able to poke fun at themselves in such a Spinal Tap manner.

Once they start reminiscing on each release, from 2000's Snail King onwards, you truly get a sense of just how much work they push into each release. The recording sessions seem very serious, with none of the goofing you normally see in such candid moments with bands.

There's also the heartening realisation that the trio are also very private and professional, preferring to travel alone and to carry, set up and break down their own equipment at gigs in order to make sure everything is to their taste.

This ties in of course with their synchronicity with projected visuals. As part of the Malleus collective, the band have always had astonishing art work and videography that moves in time with and complements their music. This of course carries on through the DVD, with trippy sections giving time to beautiful kaleidoscopic images and strange sounds taken from their back catalogue.

The Magickal Mastery Live section is just astounding. Recorded live, it captures that blunt, but invigorating sound as its intended, loud and pure.

The opening bass notes of Superjunkhead will simply blast speakers apart. Makes me wish the smarmy salesman at Currys has sold me some surround sound.

Recorded seemingly on the floor of a club, the visual aspect focuses in on the trio's movements and the dynamics of each song. Dusky, low-lit cameras stalk the bass and guitar like prey and views from both ground level and from above mean it soon becomes dizzying.

Fifteen years' graft have also meant that production values even on older songs has skyrocketed here. If you've never experienced the band live, then this is a more than adequate representation.

The Malleus visuals pour through the screen like hallucinations, with each song receiving a different treatment. Burnt out colours infest the screen one moment, the earth spins towards you at another before an unblinking, dilated eyeball stares back at you.

If it's been a while since you sat down with a music DVD, then make that change for Ufomammut, this is a towering, trippy piece of work you'll want to melt yourself down to.