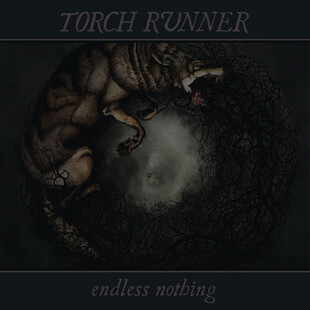 The crustification of Southern Lord in the last few years has been a remarkable if not wholly radical change in direction for the once doomier than thou legendary label. Torch Runner continue that hardcore punk trend, with the blistering and depressively titled Endless Nothing.

On the road map of extremity, Torch Runner are setting off on the path of totality forged in the barrage of sound created by Tombs or Indian, but on a hardcore kick, diverting them instead to Hexis territory or the ugliness in the blurred edges of the French extreme metal/hardcore scene. This is the soundtrack to a migraine, a rattling, buzzing blur of noise lasering in on your temples. But, you know, in a good way.

Tracks like Congregation or Rebirth showcase the album's raison d'etre - get in, launch a grenade of noise, get out - perfectly, while Bound By Misery slows the velocity by a couple of percent to allow a satisfying big dirty riff to domintate it's ending. Not as grindy as Nails, it's punk roots are occasionally decloaked, such as on the brief All We Have.

It weakens slightly in the album's second half, stand out moments less apparent, rendering it short of essential, but even at its best it all passes by in a blur; a bountiful thirteen tracks shuttling through in 23 breathless minutes. The only respite from the relentlessness of volume and style is the 4 minute-plus industrial tinged Circle of Shit, reminiscent of Fudge Tunnel at its start, and more pertinently Godflesh throughout.

This sound of tyrannous, full on ear-bleeding hardcore is heard increasingly of lately, which is a positive, so visceral and strangely vibrant, it electrifies you as a listener - and Torch Runner add to the scene, rather than fade into it. For those Cursed Cowards out there who aren't hurting enough, add Endless Nothing to your aural punishment schedule.